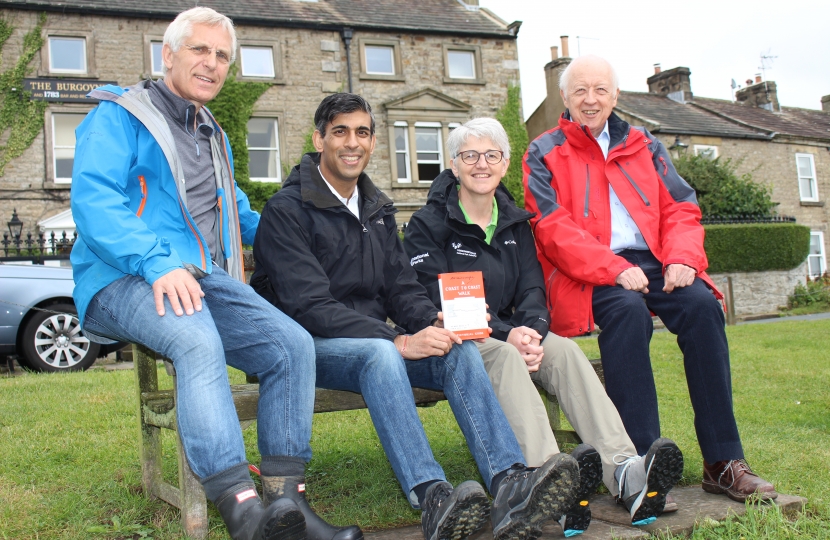 Natural England has now started work on preparing a formal proposal to make a walk an official trail.

The Coast to Coast Walk, which runs for 190 miles across the North of England, is widely recognised as one of the most scenic and beautiful walks in the world but has no official status.

Rishi believes designation would help develop further the walk’s appeal and boost the economy of a vast swathe of northern England the route passes through.

The Coast to Coast runs through some of the most beautiful scenery in the UK. Hundreds of businesses depend on it and official recognition would bring a real boost for the economy of the area.

Rishi said: "This is a walk that was rated as the second best walk in the world in a survey of expert opinion carried out by Country Walking magazine a few years ago and yet it has no official status. This is a real anomaly.

Designation would also link up the existing National Trail network, connecting the Pennine Way and the Cleveland Way.

The first stage towards designation is for Natural England to carry out a feasibility study to survey the route and identify issues which need to adressed for the path to meet National Trail standards.

Rishi said inclusion of a commitment  to National Trail status in his party's 2019 election manifesto was key to release funding for the study. That funding was included in last year's Autumn Statement.

The campaign has been supported by the broadcasters Julia Bradbury, presenter of the BBC’s Countryfile, and Eric Robson, host of the BBC’s Gardeners’ Question Time.

Ms Bradbury, who is a honorary member of the Wainwright Society, said: "As someone who has tackled this trail a number of times, and actively extolled the virtues and delights of The Coast to Coast Walk on TV/DVD and in book form, I am delighted to support the Coast to Coast - Make it National campaign.

"Not only is this route one of the most iconic legacies of the great Alfred Wainwright, but for all sorts of other reasons more and more people are wanting to get out and "walk the walk". This trend must surely be encouraged and supported where necessary.

"The Coast to Coast is a national treasure and deserves to be a National Trail."

Mr Robson, who is chairman of the Wainwright Society and made a series of TV programmes with famous fell walking author, said: “The Coast to Coast is a wonderful route and I am fully supportive of this campaign to have it officially recognised as a route of national importance. I applaud Mr Sunak’s initiative in taking up this cause.”

Mountaineer Alan Hinkes, the five times conqueror of Everest, has also lent his support. He said: “I've done most of the walk and I intend very soon to do all of it in one go.

“The Coast to Coast traverses some of the UK's finest scenery.  Across mountains and fells, wandering through through valleys and villages, it is an inspirational crossing of the North of England.”

The launch of the campaign in 2016 took place on the route at Surrender Bridge and Reeth in Swaledale.

My Westminster Hall debate on the campaign to have Alf Wainwright's Coast to Coast Walk designated as a National Trail.

I make the case for designation and Environment Minister George Eustice responds.

Minister is positive in response to Coast to Coast campaign plea

D&S column: how a pub conversation inspired my Coast to Coast campaign

A YEAR ago this week, the General Election was looming and I was on the campaign trail criss-crossing the vast Richmond constituency trying to meet as many people as I could.