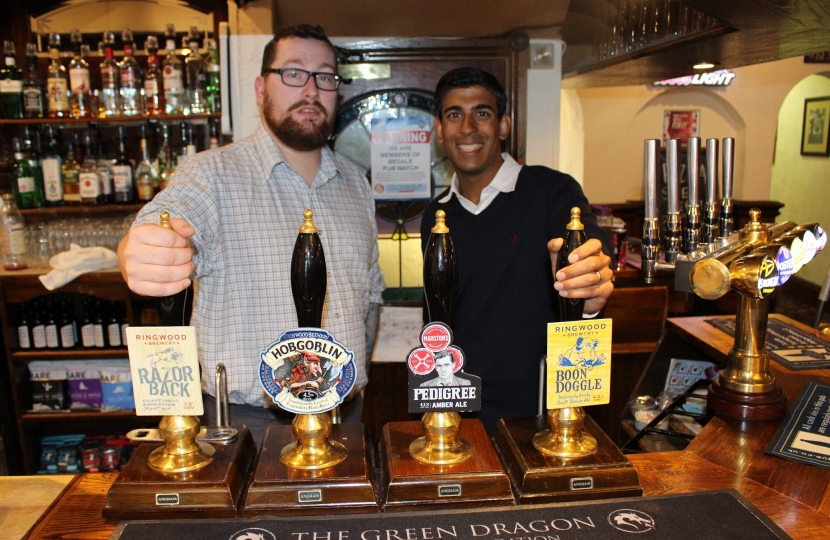 Rishi launched the biggest-ever survey of pubs in his constituency to assess the health of a crucial part of the rural economy.

The MP wrote to every pub in his sprawling Parliamentary area to find out how they are doing and what Government could do to help them in the future.

He said: "Pubs are cornerstones of rural areas like ours. Not only do they provide employment for hundreds of local people, but they lie at the heart of so many communities and help to sustain the social fabric of North Yorkshire."

Rishi said he received lots of anecdotal feedback from the pub landlords, managers and owners he came across in his constituency work but he needed more comprehensive information and data about the sector.

The survey of almost 200 pubs covers a range of industry issues including beer pricing, the tie between tenants and pub companies, staff recruitment, business rates and licensing laws.

"This information will help me fight for pubs in Parliament and raise the issues that really matter with Government Ministers," Rishi added.

He said the Government had already take steps to support pubs in recent years, such as the removal of the beer duty escalator in 2013 and the three successive reductions in beer tax that followed. Measures to help pubs with their business rates had also been introduced along with the introduction of a Pubs Code Adjudicator to oversee the relationship between pub companies and their tenants.

The survey information would be used to inform his actions in Westminster and help him contribute to debates about policy which affected the pub industry.

Pub owner Charles Cody, landlord of the Charles Bathurst (CB) Inn in Arkengarthdale, the Punch Bowl at Low Row and leaseholder of the King's Arms at Askrigg, said he welcomed the opportunity to contribute.

He said: "I think it is a very positive initiative. It recognises the challenges pub sector is facing and I welcome Mr Sunak's survey as a way of getting across the views of pub owners and tenants."

Michael Hunt, a tied tenant of Marstons at The Green Dragon in Bedale, also welcomed the survey. He said: "I've been in and out of the pub business for years and this is the first time that anyone has asked me directly about what I think about the way the industry operates as a whole and what could be done to improve it."