Victory for A1 tourism signs 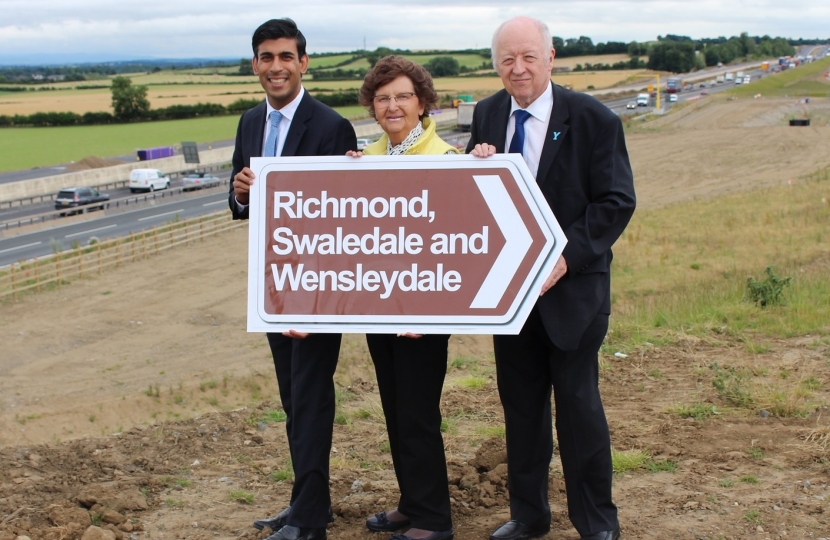 A campaign to get tourism signs for Richmond and Swaledale from the new A1 motorway has been successful.

Rishi took up the issue after longstanding signs to "Richmond – Georgian Market Town" were removed from the Scotch Corner junction during the upgrading works.

Highways England initially refused to replace the signs, arguing that they were not necessary and did not meet current regulations for brown tourism signs.

But Rishi, supported by the leaders of North Yorkshire County and Richmondshire District councils, Cllrs Carl Les and Yvonne Peacock, pressed the case at the highest levels, saying Richmond should not be placed at a disadvantage because of the upgrade.

It followed their successful campaign last year to win brown tourism signs for Wensleydale at the Leeming Bar junction.

Highways England has agreed to pay for the Scotch Corner signs after Rishi argued that the local community had suffered because of the year-long delay to the upgrading project.

Rishi also obtained the support of the Transport Minister Jesse Norman for the signs to be erected. The Minister's intervention was required because the signs did not meet the strict eligibility criteria for brown tourism signs Highways England normally adhere to.

Rishi said: "It seemed grossly unfair that Richmond should lose the benefit of the tourism signage because the road had been upgraded. I'm grateful for Highways England's change of mind and the Minister's support."

“I`m pleased to have been able to support Rishi in this campaign to get recognition for one of the jewels in North Yorkshire from the thousands of motorists passing by on the busy A1(M)  encouraging them to turn off today or return another time. The visitor economy is hugely important to North Yorkshire and to Richmond”.

The signs installed at Leeming Bar – Junction 51 – were paid for by Richmondshire District Council which also joined the fight for the Scotch Corner signs.

The council's leader Cllr Yvonne Peacock said: “ I am delighted that common sense has prevailed. It is important that Richmond and Swaledale are signposted as tourism destinations so we can encourage more people to visit our beautiful district.”

The news was also welcomed by the Richmond Business and Tourism Association which had also supported the re-instatement of the Scotch Corner signs.

A spokesman for Highways England said the signs to Richmond and Swaledale would be erected on the north and southbound carriageways of the A1(M) at Scotch Corner – Junction 53 – by the start of the main summer tourist season.