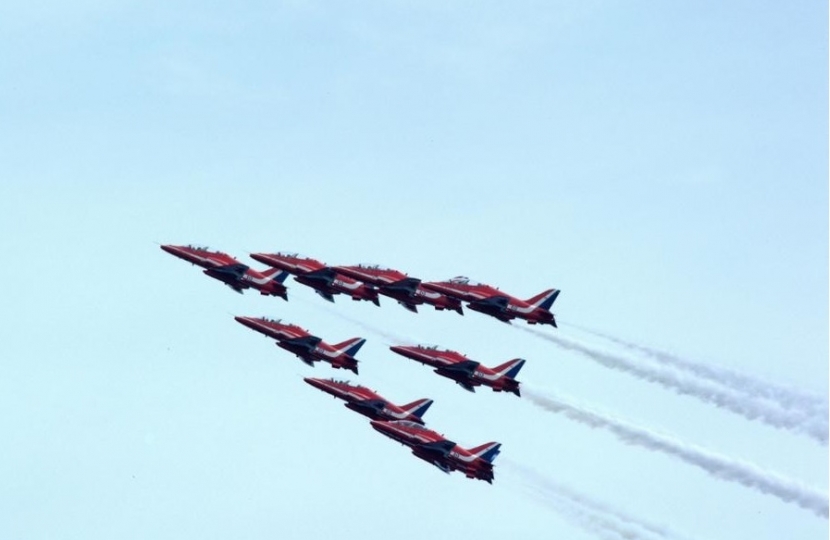 Rishi Sunak MP has called for RAF Leeming to be the new home for the Royal Air Force Aerobatic Team – the world-famous Red Arrows.

The Richmond MP says the squadron – made up of pilots, engineers and support staff – would be an “ideal fit” for the North Yorkshire air base.

The RAF is in the process of selecting a new base for the Red Arrows following a decision announced in the summer to close their current home – RAF Scampton in Lincolnshire.

In his letter, Mr Sunak says the base has significant advantages over its rivals, principally the presence at Leeming of 100 Squadron flying Hawk T1 fast jets, the same aircraft used by the aerobatic team for its stunning displays.

He adds that the North Yorkshire base has the capacity to accommodate the team having benefited from substantial investment in the past when it was home to two squadrons of Tornado fighter bombers.

He also points to recent investment in the local infrastructure – including the recent £400m upgrade of the A1 which has provided the base with a new junction and easy access to the national motorway network. Local roads have also been improved with the completion of the Aiskew-Bedale-Leeming bypass.

Mr Sunak, who visited the base in 2016, adds: “North Yorkshire has a rich heritage of hosting the Royal Air Force dating back to the Second World War when Bomber Command had many bases in the area.

“This proud heritage has been maintained through the years when RAF Leeming played a leading role in the UK’s air defences in the 1980s and 1990s. This role saw major investment by the Ministry of Defence in the base’s facilities which is still in place.”

He concludes: “I can assure the Ministry that the Red Arrows team and their families would be given the warmest of welcomes.”

Mr Sunak’s call has been backed by the Mayors of the two towns nearest to the base.

Cllr Andrew Hallett, Mayor of Bedale, said relocating the Red Arrows to RAF Leeming would have his “full personal support” and the matter would be raised at Monday’s meeting of Bedale Town Council where consideration would be given to formally backing the idea.