A celebration of Richmondshire's apprentices 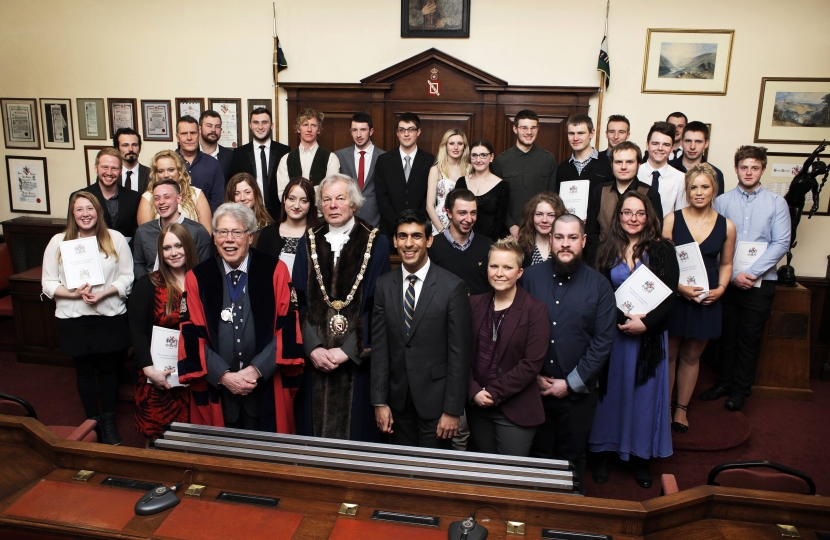 THE power of apprenticeships to develop young people’s skills and boost the economy was highlighted at a prestigious awards ceremony.

Rishi Sunak, MP for Richmond, spoke of how encouraging young people to earn while they learned could help fulfil their potential while improving the businesses they worked for.

He was presenting honours at the first Apprenticeship Awards organised by the Company of Fellmongers of Richmond in the town hall on the eve of National Apprenticeship Week.

More than 30 young people from the Richmondshire area received certificates and awards from Mr Sunak after being presented to the Master of the Richmond Fellmongers, John Clarke, and the Mayor of Richmond, Cllr Clive World

Mr Sunak also spoke of his North Yorks Apprenticeship initiative launched the same day which aims to increase the number of apprenticeships in his constituency by creating an online portal to make it easier for firms to list apprenticeship opportunities and for young people to find them.

He said: “I believe in apprenticeships because they are one of most powerful motors of social mobility and productivity growth.  An apprenticeship represents opportunity, aspiration and ambition.

“Apprenticeships make our companies more competitive. Some 70 per cent of employers report that apprentices help to improve the quality of their product or service.

“They offer young people a ladder to climb, with both higher pay and a sense of personal fulfilment at the end of it.”

Mr Sunak said the Government was putting 50 per cent more money ­– a total of £1.5bn ­– into supporting apprentices but companies needed to be encouraged to create more.

“We need to persuade more employers to offer apprenticeships,” he added. “At the moment, only about 15 per cent of employers in England do. In Germany the figure is 24 per cent and in Australia 30 per cent.”

The Government, as well as offering grants and meeting the cost of training, was making it a condition for firms applying for Government contracts that they employ apprentices. By 2020 it was planned to have increased the number of apprentices by three million.

Among the apprentices receiving awards were a number working for the Canal and River Trust and being trained in heritage skills like carpentary and masonry by the Heritage Craft Alliance (HCA) at Snape, near Bedale.

The HCA and the Fellmongers made special awards to three apprentices – Hayley Garrod, Alex Page and Kate McCulloch – for their work at Snape.