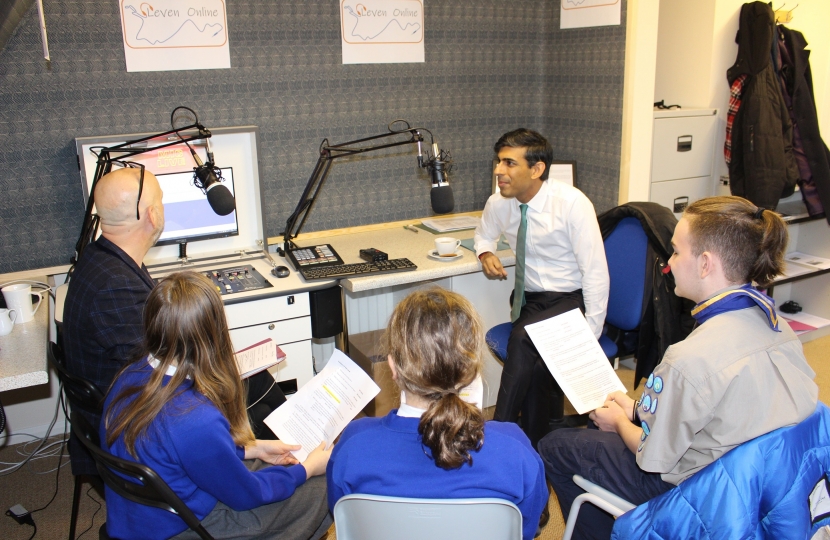 They made up an interview panel chaired by John Earland, a regular reporter for Leven Online Radio (LOLR).

Bee Williams and Emilia Burns from Hutton Rudby Primary School and Jack Turton from Stokesley Secondary School quizzed Mr Sunak about a range of issues suggested by pupils of the schools and from facebook followers of the radio station.

The questions covered climate change, opportunities for young people in the North East and the North South divide. Mr Sunak, who is Chief Secretary to the Treasury, answered questions openly and honestly and complemented the young people on their positive attitude and drive for improvement.

Mr Sunak, who in recent weeks has faced the BBC’s most senior political interviewers, including Andrew Marr and Nick Robinson, said: “I was most impressed by the quality of the young people’s questions which covered a lot of ground and some big issues.”

On a lighter note, Mr Sunak talked about his passion for the Star Wars movies who would love to have had a bit part in a one of the films.

He also praised the professionalism of the Leven Online studio and set-up. The station started broadcasting last year and is part of the Hutton Rudby Methodist Chirch community hub.

The interview with Mr Sunak was broadcast on Leven Online Radio last week and is available as a podcast on www.levenonlineradio.com