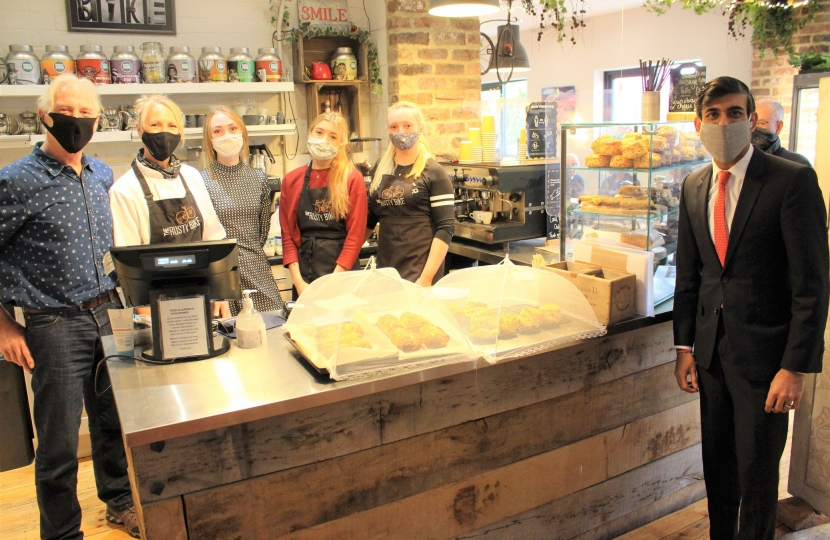 A North Yorkshire café which has become a mecca for cycling enthusiasts is on course for recovery.

The Rusty Bike, at Swainby, near Stokesley, is rebuilding its business and welcoming more cyclists – an activity that boomed in lockdown.

Owner John Nelson told Rishi, who called at the café during a day of constituency engagements, that the family business had survived lockdown by offering takeaways and deliveries to the surrounding villages and with the help of the Government’s support measures for the economy.

Mr Nelson said a business grant and the furlough scheme had been a “lifesaver” for the enterprise, helping it to pay its local suppliers when it had closed its doors and to retain the maximum number of staff for when it was able to re-open.

Since then, the business had done well with many of its cycling enthusiasts returning and the arrival of new customers who had taken up cycling during lockdown.

“When we opened three years ago we definitely benefited from the cycling boom that developed with the Tour de France coming to Yorkshire and then the Tour de Yorkshire,” said Mr Nelson. “It put the county on the map as a great place to cycle.

“It has been great to welcome back our cycling customers and we have noticed a lot of ‘newbies’ – people for whom lockdown offered the chance to try cycling.”

Mr Nelson said the café had become a hub for the villagers, not just visiting cyclists. While many villagers had returned after lockdown, some older members of the community had remained at home. The café had continued with its local delivery service to reach those customers.

Rishi said he was very impressed by the success of the business and the way it had adapted its ways of working to function through the pandemic.

He said: “John Nelson and his family have created a special business serving both visitors to our area and local people. I am glad the Government’s support measures sustained them through the most difficult period and are still assisting them now.”

The Rusty Bike was established as a café and bike shop/hire business in the Spring of 2017 by Mr Nelson – a lifelong cyclist - and his son and daughter, Rob and Jen.

The café proved an instant success with keen cyclists from County Durham, Teesside and North Yorkshire. Last month, the North York Moors National Park approved development plans for the business which include additional parking and an extension to the premises – a former garage.

Rishi has welcomed the news that the public should be able to view an important but fragile part of Richmond’s history.

Heritage chiefs told Rishi that a four-year conservation project to save the graffiti on the cell block walls of Richmond Castle was complete.