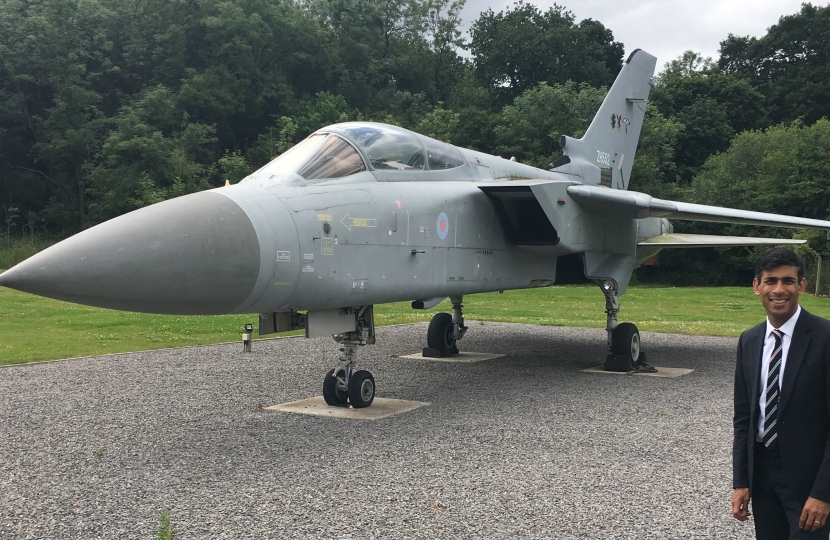 On the way back from one of my regular surgeries in Leyburn recently I called into RAF Leeming to have a chat with the new station commander Group Captain Blythe Crawford.

It’s a source of great pride to me that I have two major military bases in the constituency in the shape of the British Army’s largest garrison at Catterick and Leeming.

While we know the Garrison is to expand further in the coming years the future for Leeming is just as bright, Grp Capt Crawford told me.

He could not comment officially on my campaign to bring the Red Arrows to Leeming when the Royal Air Force Acrobatic Display team’s base at RAF Scampton in Lincolnshire closes in 2022, but he did say the base was well placed to accommodate more RAF activity. It has a capacity and the facilities to welcome more RAF units.

While we await the military top brass decision on the Red Arrows – it is on a Ministry of Defence shortlist of three possible new homes for the pride of the RAF – Grp Capt Crawford is busy making the sure the base builds its links with the community beyond the perimeter fence.

That means the local community where he wants to see more of the base’s servicemen and women getting involved in events - like the forthcoming sausage and beer festival at Camp Hill, near Bedale, where 34 Squadron RAF Regiment are providing support – but also the academic community in the North of England.

Before arriving at RAF at the end of last year Grp Capt Crawford spent time in Washington DC with the US Air Force strategic studies group and witnessed the power of bringing together academic excellence and practical service experience to drive innovation in the military. He has begun replicating that here by reaching out to the great universities we have in Leeds, Newcastle and the rest of the North. It sounds very exciting.

It also builds on work at RAF Leeming before Grp Capt Crawford’s arrival. Two years ago I spoke to local schoolchildren at the launch event for a STEM (science, technology, engineering and mathematics) conference organised by Richmond Soroptimists at the base. The conference’s aim was to get more young people, particularly girls, interested in pursuing these subjects as careers.

I will work with Grp Capt Crawford to build on these community links.

While on the subject of community, it was with great sadness I heard last weekend of the death of Cllr John Blackie, the Upper Dales county, district and parish councillor who did so much for the areas he represented, particularly the town of Hawes.

John bore his long illness with great fortitude and it is enormously to his credit that throughout his battle with cancer, the gruelling treatment and the complications that took their toll, he kept on fighting for his community.

Tellingly, only a matter of days before his passing we heard of his latest success in Hawes - securing an agency of the Newcastle Building Society in the community office in Hawes and so adding to the financial services on offer there.

Achievements like that, added to a long list of others in Hawes, like the retaining of the library and post office services under the umbrella of the community office, the Little White Bus service and the community filling station, will be a lasting and most fitting memorial to a man who never stopped campaigning for the people he represented. He will be much missed.