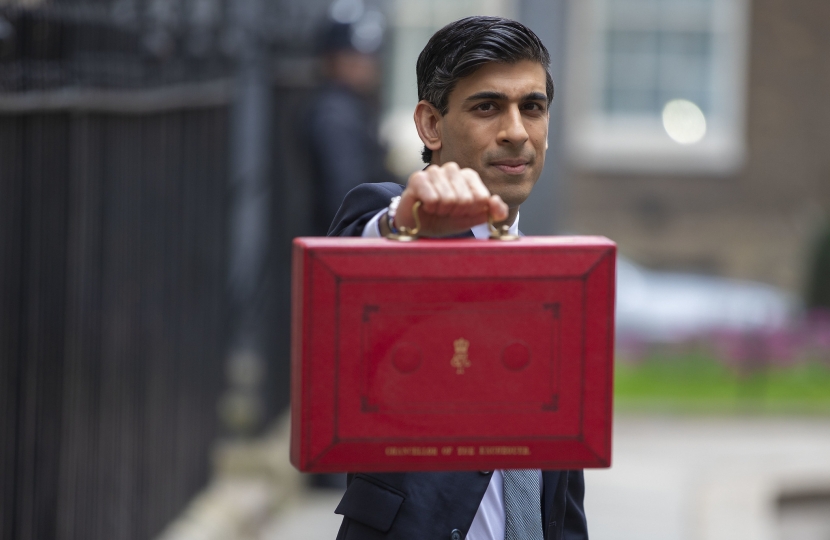 Preparations for this week’s Budget – my second – were very different to a year ago.

Last February I had been appointed to the role of Chancellor with just 26 days before the big event and the enormity of the challenge posed to the country by the Covid-19 pandemic was just becoming apparent.

This time I had more time to prepare but the size of the challenge the country’s economy faces is, if anything, even bigger.

I knew we had to protect the economy and people’s jobs and livelihoods during the biggest public health crisis for a generation and that task has remained uppermost in my mind over the past year and as I prepared my second Budget.

My first priority has been to protect jobs and wages, to sustain businesses in this final phase of the pandemic as we reap the full benefit of our incredibly successful UK vaccination programme and the restrictions on people’s lives are lifted.

Extension of the furlough scheme, further grants for the self-employed, VAT and business rates relief, and support for the housing market which I announced on Wednesday are central to that priority as the economy emerges from lockdown.

The total Covid support package will cost the country £352bn but as I said last year we would do whatever it takes to protect the British people during the crisis. That is what I have done and continue to do.

But I also said this unprecedented support for the economy has presented a huge challenge to the public finances. We have borrowed a record amount over the last year – the highest level since World War Two – but we were only able to do because we entered the crisis in a strong position.

In order to be sure we can respond as quickly and effectively to any future economic crises, and to continue funding good quality public services, we have to bring borrowing and debt back under control. It will be the work of many governments over many decades but in asking bigger businesses to pay more and in freezing personal tax thresholds we make a start on that process.

The third priority in the Budget was about building a better, a greener and more innovative economy in all corners of the UK. Specific measures to help small businesses grow coupled with assistance to increase productivity through better digital skills and software are part of that along with further steps to make the UK the most attractive country in the world for high-growth, innovative companies.

Readers of this newspaper will be particularly interested in the announcement about a new economic campus being established in Darlington to house part of my Treasury team, along with other critical Government economic departments.

Also, Teesside is to benefit from investment in port infrastructure to build the next generation of offshore wind projects and is to be one of eight new freeports in England – the key to unlocking private investment, trade and jobs.

And only an hour away from Teesside and Darlington, in Leeds, we will have the new UK Infrastructure Bank with £12bn to invest in the green industrial revolution.

These three announcements underline this Government’s commitment to the redraw the UK’s economic map and spread the awesome power of opportunity to all corners of the country.

Finally, I was also pleased to announce a further £10m for mental health support of Service veterans – additional recognition of the sacrifice made by our Armed Forces community locally and across the UK.

This week, above all, I set out to keep the promise I made 12 months ago, to do what must be done, when the danger is imminent, and when no one else can. To protect the people and the public services they value, to plan for a recovery in which everyone has the chance to play their part and to look beyond our present difficulties to future possibilities.

An expanding Stokesley business has full order books and is looking to expand as the economic recovery from the pandemic gathers momentum.