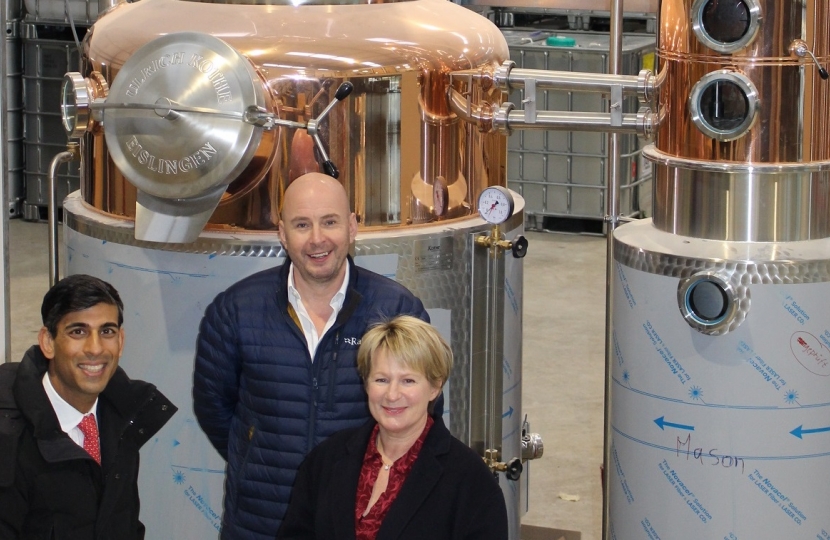 I’ve been passionate about business ever since I was teenager helping out in my mum’s community pharmacy.

In my career before doing this job I helped businesses, particularly small and medium-sized enterprises, to develop and grow.

Today, one of the best parts of being your MP is encouraging these types of businesses to do just that in North Yorkshire.

Small businesses are what make this area tick. We don’t have big firms employing many thousands. Instead we have hundreds of small enterprises collectively employing thousands.

Family firms like Masons Yorkshire Gin at Bedale, barely seven years old but creators of a premium brand in what has become a crowded ‘boutique’ gin market, exporting to Australia among other countries and employing 30 local people.

Like many successful businesses, Masons was born out of passion – in this case Karl and Cathy Mason’s love of gin. Both had successful careers doing other things which they gave up to start their business, taking that risk, saying goodbye to the regular wage to set up Masons – Yorkshire’s first gin distillery - from scratch.

It’s that passion that kept them and their team going after last year’s fire which gutted the old distillery in Aiskew. New premises have been created at Leeming Bar Business Park and I was recently lucky enough to have a sneak preview in advance of the official opening in a few weeks’ time.

Karl and Cathy showed me round the new distillery with evident pride. A beautiful, copper still has been installed along with a new bottling plant which I am pleased to say is made in Yorkshire.

And every bottle of Masons Gin features the Yorkshire rose no fewer than five times. Great county branding!

The Masons’ story is inspirational and it is my job to make sure we create the best conditions for more enterprises like this to be born. An important part of that task is regularly meeting and talking to local businesses like Masons and finding out what taxes and regulatory policies they need to support their enterprise further.

Yorkshire already has great record for business start-ups – there were 23,500 in 2018. I’ll be working on the Government’s commitments to make Yorkshire and the UK the very best place to start and grow a business through cutting employment taxes, expanding start-up loans and our Red Tape Challenge – ensuring regulation does its job to protect workers, consumers and the environment while also being proportionate, especially for small businesses.

An issue that’s been raised with me a number of times recently is that of the growing incidence of dog theft.

A constituent who had her dog stolen from her garden last summer came to a surgery to point out what she feels are inadequate penalties for those found guilty of dog theft.

She is also concerned about the current rules relating to the micro-chipping of dogs which offers the opportunity to control the illegal trade in stolen dogs. At present vets are not legally obliged to check the micro-chipped dogs they treat against the centrally-held ownership register and therefore the prospect of owners being reunited with their stolen pets is unlikely.

I think these are reasonable points. I am proud to say that the Government has already increased maximum sentences for animal cruelty (particularly for dog fighting or the abuse of puppies and kittens) from just 6 months as they were to now 5 years. The Government is now also considering doing the same for offences of dog theft which often under the law get treated the same way as the theft of an object rather than a pet. I have written to Theresa Villiers, the Secretary of State at the Department of the Environment, Food and Rural Affairs, for her views and the latest position on an issue which I know has caused a great deal of distress – and fear - for many dog-owning constituents.