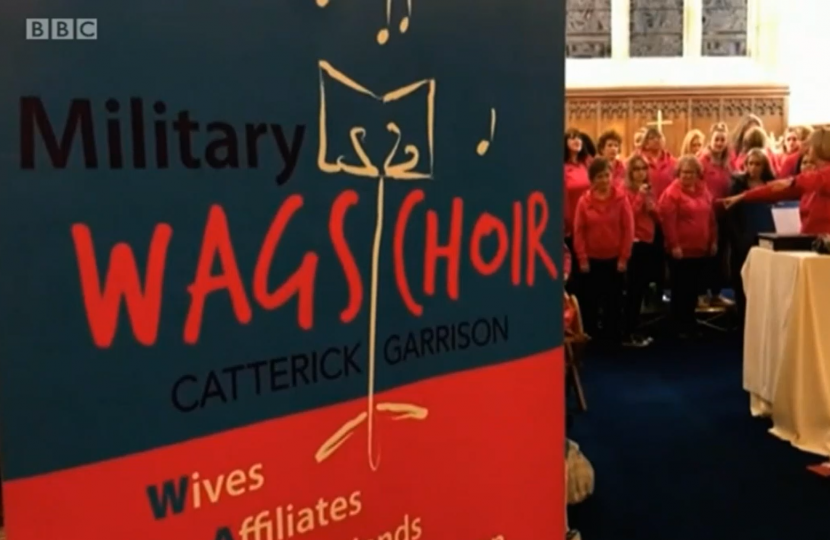 I love going to the movies but as you might imagine I don’t have much leisure time at present.

Many of you will remember the hit reality TV series The Choir: Military Wives with choirmaster Gareth Malone. It featured a group of Army wives in Devon who formed a choir while their husbands were serving overseas.

However, that series was based upon the Military WAGS (Wives, Affiliates, Girlfriends, Servicewomen) Choir formed on the Garrison in 2010 by two Army wives Nicky Clarke and Caroline Jopp with the support of renowned Richmond music teacher Carol Gedye.

Catterick-based units had just been posted to Afghanistan at a time when injuries to Service personnel and loss of life was high. The idea was to give those left at home a focus and support to keep spirits high through fun and friendship.

It was enormously successful and was the inspiration behind the TV series which in turn left a lasting legacy through singing and forged friendships for thousands of other women with military connections.

Since 2010, the Catterick choir have sung their hearts out to benefit many causes – both Service-related and local – and have remained a welcoming support group for women in and around the military in the Garrison.

It is most appropriate that the movie acknowledges and celebrates the Catterick origin of what has become an international phenomenon.

I understand some scenes for the film were shot on the Garrison and members of the current choir took part in recording the soundtrack, which includes a number written specially for the film by Robbie Williams.

Tonight, the film will go on general release with a special showing at the Empire cinema in the Garrison, preceded by a performance by the Catterick Military Wives Choir. I would have loved to have been present but have to remain in London working on the Budget.

I have, however, written a message of support and thanks to the choir on what promises to be a very special evening.

This money represents a 50 per cent increase on the funds the council has had to spend on subsidising services.

There are opportunities to create new services for communities currently without one, to make existing services more frequent and also to trial on-demand services.

On-demand transport can be used to replace infrequent, traditional services which fail to meet a local community's specific needs, with ones which can get closer to where people live, at a time convenient for them.

The county council has to put ideas forward to the Department of Transport by early next week. If you have ideas for improving services in your community contact the county council via this link https://www.northyorks.gov.uk/funding-supported-bus-services-and-rural-mobility-fund-202021