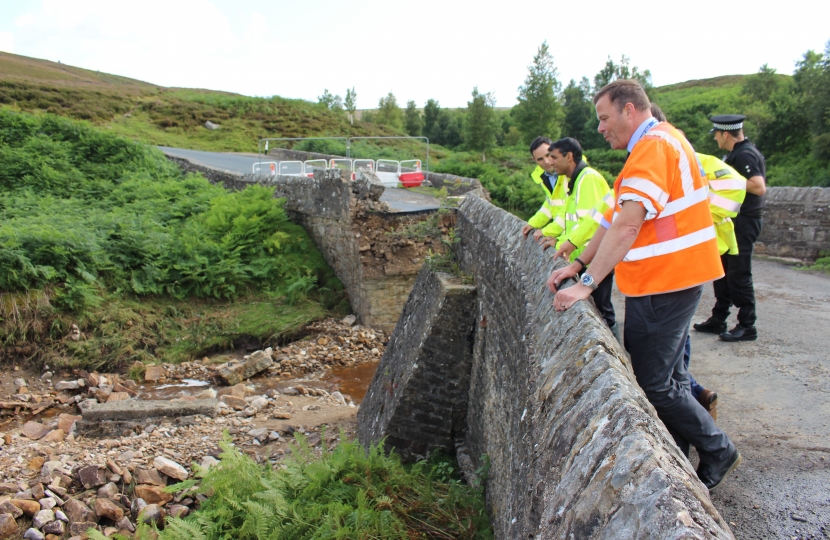 The story of Rowena Hutchinson sums up the tragedy of last week’s flash-flooding in the Dales.

At 3pm on Tuesday, Rowena had a home and a business. At 4pm she had lost both when the deluge came through the backdoor of the Red Lion in Langthwaite, bringing her back garden - in the shape of mud, debris, a tree even - with it. She almost drowned before being rescued by a fireman.

I met Rowena during the second of two visits I made to the affected areas last week, as the initial rescue operation moved into the recovery phase.

All the pictures in the D&S last week and what we saw on our TV screens don’t get across the force of nature that overwhelmed this part of the Dales last Tuesday afternoon. You had to see it in the flesh, so to speak, to really grasp the scale of the devastation.

At Grinton, Fremington, Leyburn and Bellerby the sense of communities in shock was palpable. In many instances that traditional Dales stoicism I referred to last week was at breaking point.

In Reeth and Arkengarthdale I spoke to many of the most badly-affected farmers, who were dealing with multiple problems, from lost stock and feed, diverted watercourses, damaged buildings and dry-stone walls which had stood for a hundred years but were now strewn across the landscape.

In Reeth Memorial Hall, I met the volunteers who, with support from the local authorities, have been running the emergency hub. The help that has poured in, both people’s time and donations, has been simply amazing.

Like others, I also wanted to do my utmost to help those affected.

Firstly, I relocated my Westminster office staff here to join my Northallerton team. Together, we worked non-stop through the weekend to provide support to individual victims, coordinating with multiple agencies to ensure that they were re-housed, had access to safe water, power and the other essentials of life.

From all my visits and conversations, it was clear to me that there were two immediate issues that needed attention: firstly, getting the bridges repaired and roads opened as soon as possible, and secondly, getting the becks cleared of debris to reduce further risks.

I have been urging and working closely with our County Council on a plan for the roads and bridges. I am glad to say work has already started and temporary bridge structures will soon be in place and the main Reeth-Richmond road open to two-way traffic by August 16. Especially with the Reeth Show and UCI cycle championships coming up, it is important for the local economy and community that we are back up and running.

This past Monday I also convened a meeting of all the major stakeholders to drive progress on the issue of beck clearance and this is now happening, led by our councils. The Environment Agency has also engaged contractors to unblock Grinton Gill where it joins the Swale and plans have been drawn up to remove debris further upstream.

And of course, I have been fighting hard down in Westminster to see what support we might be able to get from central government.

I have been talking extensively to the Transport Secretary about the £3m cost of rebuilding the two bridges and the damaged roads, a sizeable sum for our local community.

I've been pushing the Farming Minister about re-establishing the Farming Recovery Fund which will offer one-off grants to farmers to cover uninsured costs of bringing their land back into productive use by, for example, rebuilding walls and fencing. The Government established this Fund in the wake of the Cumbria flooding in 2015.

And lastly, I have also had conversations with the Secretary of State at the Ministry of Housing, Communities and Local Government, who personally contacted Richmondshire District Council to offer the ministry’s help with the application process for Bellwin funding. Bellwin is the government’s emergency financial assistance scheme which reimburses local councils for their exceptional costs in a desperate situation like this.

Rest assured I will keep doing everything I can to help and will update you on progress. But in the meantime, I pay tribute to the resilience and fortitude of all those affected, and offer my thanks to all those who have helped.

You have all humbled and inspired me.