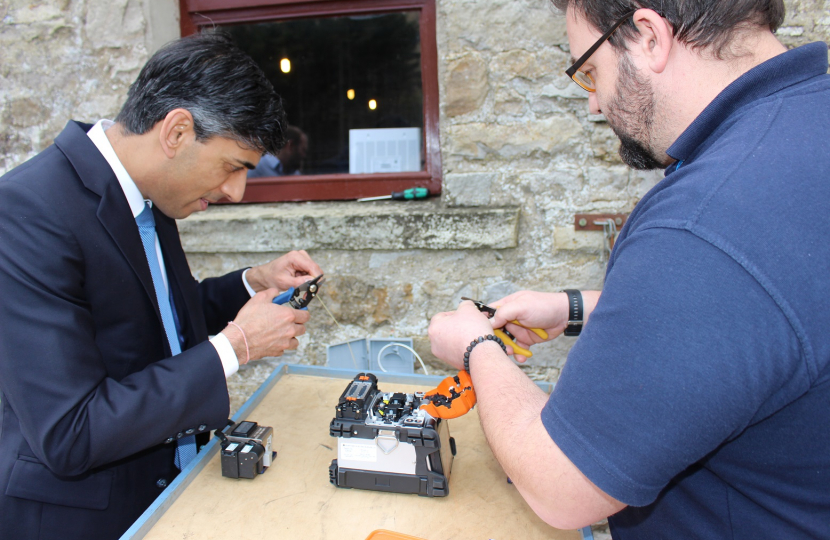 One issue featured prominently in my early contributions as your MP in the House of Commons.

Rural broadband and mobile phone coverage were referenced in both my maiden speech and on my first opportunity to raise a point at Prime Minister’s Questions.

On both occasions I made the argument that people living in rural areas should not be disadvantaged by slow broadband speeds and patchy or non-existent mobile coverage simply because of where we live.

Since then, good progress has been made, particularly with broadband. Backed by substantial Government investment and the County Council through the Superfast North Yorkshire programme, the percentage of homes and businesses with access to superfast speeds has risen from just over 50 per cent to 94 per cent today.

That should rise to 97 per cent by the end of the current phase of investment.

The geography of North Yorkshire and the remoteness of some of our smallest villages present real challenges – technical and commercial – for connectivity. But this year I have seen two such communities linked up to new broadband services which are both fast and reliable.

At Picton, I saw the work completed on a mix of fibre and wireless technologies which delivers ultrafast speeds (over 100 megabits per second) to every home and business.

And last month I was privileged to splice the fibre which brought gigabit broadband (that’s up to 1,000mbps) to the hamlet of Cotterdale – possibly one of the most remote communities in Yorkshire.

Fourteen homes now enjoy a broadband service better than that available in many of our cities thanks to a combination of a huge community effort, a local rural broadband provider and financial support from government and the Yorkshire Dales National Park.

Community volunteers helped dig the trenches for the fibre and the Government’s support for the project came in the shape of the Gigabit Voucher Scheme – that’s £1,500 for every home and £3,500 for every business in a rural area with slow speeds and not likely to be reached by any planned commercial broadband network.

Filling in the gaps in our local mobile phone network coverage has also been a longstanding aim. This year we see the completion of a network of nine new masts in Swaledale and Wensleydale which when connected to the network will eliminate nearly all ‘not-spots’.

This big increase in coverage is a side benefit of a new communications network for our emergency services using the existing EE network and extending it to cover the most remote areas of the UK. The Home Office is funding the construction of the masts in our area and I am pressing to get these masts switched on as soon as possible.

A separate development which I very much welcome is the Shared Rural Network (SRN). As a backbench MP I often made the case for mast sharing by mobile phone operators in rural areas – to make it commercially feasible but also to reduce the impact on the landscape.

That’s exactly what is happening under the £1bn SRN programme with the four mobile providers (EE, Vodafone, Three and 02) working with the Government to ensure this network will also eliminate those ‘not-spots’ and provide improved choice for users.

So far, I’ve been notified of plans for three additional masts in the Dales. When I have details of the rest of the programme I will share them.