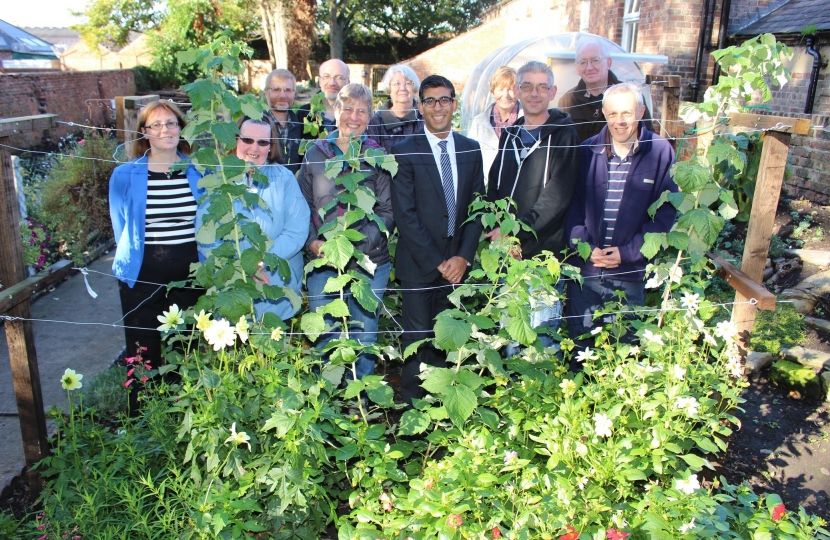 In my role as Local Government Minister, I recently launched a £1m Pocket Parks programme designed to help create new green spaces or refurbish existing ones.

The initiative will primarily - but not exclusively – be attractive to urban areas where green space can often be at a premium – which is such a contrast to our part of the world where we are blessed to have easy access to so much green and pleasant landscape.

The proximity of two of this country’s great national parks is the most obvious example of our fabulous Broad Acres but I was also thinking of the open spaces in or very close to our market towns such as Bedale Hall park, Leyburn’s Shawl, the Coronation Park at Catterick Garrison or the newly-created Secret Garden just off Northallerton’s High Street (pictured above).

Perhaps the best example is the 96 acres of land in and around Richmond looked after by the Richmondshire Landscape Trust (RLT), a charity set up in 2004 to buy the land when it was made available by the district council.

The money for the five parcels of land was raised using funds from small-scale local activities and donations to what was then known as the Richmondshire Open Spaces Appeal.

Today, the Trust and its band of hard-working volunteers holds the land in trust and maintains it for the people of Richmond and the surrounding area.

Like my predecessor William Hague, I am a proud member of the RLT. When I, along with 500 other MPs, was recently given trees to plant in my constituency to mark Her Majesty the Queen’s service to the Commonwealth, I couldn’t think of a better recipient.

After planting the five trees at the Trust’s land at Sleegill, overlooked by Richmond Castle, two of the Trustees, Jacqui Singleton-Turner and John Blackburn, gave me a tour of some of the other open spaces looked after by the Trust.

To be fair, the terrible visibility that day meant it wasn’t the best time to see them. But it didn’t take much imagination to appreciate the stunning views of the lower Swale valley and Richmond town to be had from Westfields, a medieval pasture off Reeth Road, when the sun shines.

The work that has been done by the volunteers to repair dry stone walls, restore ancient drainage systems, plant hedgerows and wildflower meadows is very impressive, and it is work that will continue to preserve and enhance this precious landscape resource for future generations.

While the Pocket Parks programme is expected to be popular in our cities, there is no reason why community groups in the Richmond constituency should not consider applying for funding if they have a small patches of land (0.4 hectares or less) which could be developed as a green space.

Grants of £15,000 are available to community groups to assist with the creation of new small parks and up to £25,000 is available for existing parks of any size in need of refurbishment.

If any community group wants to know what can be achieved in a small area, I would urge them to check out Northallerton’s Secret Garden behind and to the side of the United Reformed Church in the High Street. It’s an amazing place.

You can find more details about the Pocket Parks programme and how to apply on the Ministry of Housing, Communities and Local Government website.