D&S column: with a hill farmer on the roof of England 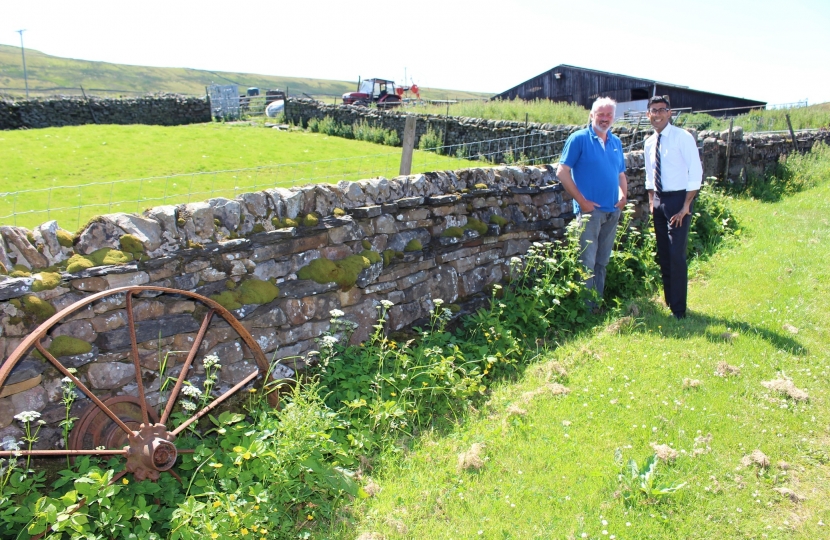 IF you take the road out of Hawes towards Ingleton on the western-most edge of the Richmond constituency you enter a little-known side valley called Widdale.

Just a couple of miles from the Cumbria border and the Pennine watershed, it is 1,400 ft above sea level - pretty much on the roof of England. There are just a few farms, plenty of sheep, some cattle, curlews and lapwings. The landscape is bleak but stunning.

Last Friday, I spent time on one of those farms talking to Martin Coates where he is the third generation of his family working this land in the heart of the Yorkshire Dales National Park.

His grandfather came to Redshaw Farm seventy years ago. Today, his son Brian works with him on the farm and as Martin is a grandfather he hopes that one day there will be a fifth generation Coates looking after Redshaw.

This is farming at the margins. In a good year, Redshaw generates a small surplus. Martin’s wife Fran works at the Dales Countryside Museum in Hawes and their other son James is a full-time dry-stone waller to help generate income for the family.

Redshaw is a fairly typical Northern hill farm. Support payments are essential to farming here and the purpose of my visit was to fully understand the challenges Martin and his family face – and the opportunities ahead - as we create a post-Brexit British Agricultural Policy.

Like so much of the last fortnight, it was a gloriously sunny day and hard to believe that this is one of the wettest farms in Yorkshire with 90 inches of rain a year on average.

Martin breeds top-quality pure Swaledales along with a flock of Lleyn sheep, which he crosses with Texels to produce butchers’ lambs, and a small herd of Hereford cattle.

It’s a difficult existence. In one of his sheds he showed me the 30-year-old silage trailers, bought secondhand, which he somehow manages to keep serviceable and the fleeces waiting to go the British Wool Marketing Board at Bradford – worth about a £1 each which cost him more than that to have sheared.

We spoke about the burden of regulation – some of which appears contradictory – and the form-filling associated with running a farm and particularly farms like his which receive support payments for stewardship of the landscape and wildlife.

I was hugely impressed by his passion, his commitment to the land and the love of his livestock.

Later the same day I spent time with a larger group of Dales farmers who had kindly agreed to meet me (thanks to Jim McRobert of Carrs Billington for his help in organising this) and who made similar points to Martin’s.

Of course we spoke a lot about Brexit. However, I remain confident that we will get an acceptable trade deal - not least because EU farmers need it more than British farmers.

Leaving gives us the opportunity to develop a bespoke farm policy which considerably lightens the regulatory burden and targets support payments more effectively at the farmers, like Martin, who need it the most to farm in difficult areas and in doing so protect and sustain our most valued landscapes.

It is one of the great privileges of my job to spend time with people like Martin. The dedication with which farmers work the land, sometimes in difficult conditions and for little reward, is striking. As ever, there was lots I learnt from all the Dales farmers I met. My task now is to make sure those DEFRA officials designing the new agricultural policies down in London know exactly what Martin and his fellow hill farmers are dealing with, day in day out, on the ground. You can rest assured that I am on their case.