D&S column: how I secured up to £5m for Dales flood recovery 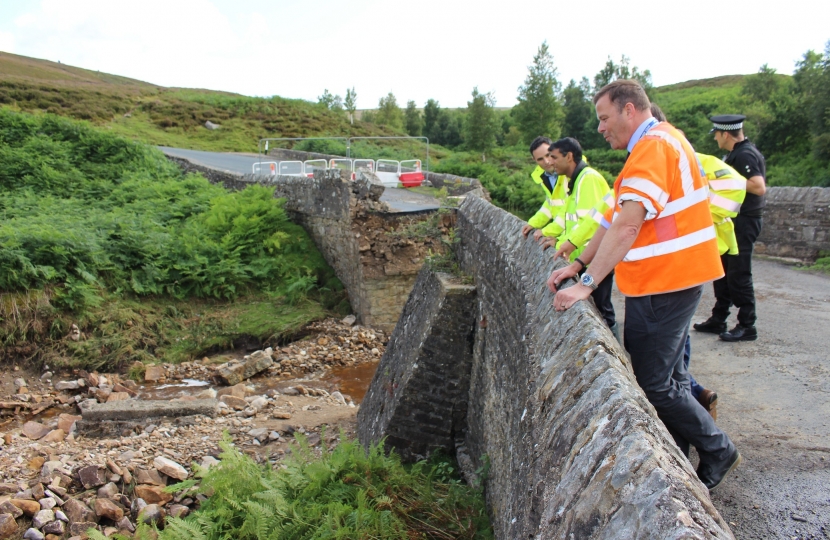 I was absolutely delighted to make the announcement last week of a comprehensive package of aid for the flood-hit communities in the Yorkshire Dales.

The process of securing the money – which totals around £5m – was not as straightforward as it might have appeared.

Part of the challenge was that in some respects what happened on the afternoon and evening of July 30 was unlike other major flooding incidents elsewhere in the UK in recent years.

It was highly localised – affecting primarily Swaledale, Arkengarthdale and lower Wensleydale around Leyburn. The top end of the dales largely escaped the worst and in Richmond it was reported that not a drop of rain fell.

That made the incident very different in scale to the floods which hit the whole county of Cumbria in 2017 and the Somerset Levels in 2013/14.

But during my visits to the Langthwaite, Reeth, Fremington, Grinton, Leyburn and Bellerby on the Thursday and Friday of that dreadful week, I accumulated the evidence required to make the case for assistance on a similar scale.

That weekend I spent a lot of time on the phone with the Transport and Local Government Secretaries and the Farming Minister explaining that although the area affected was small, the impact had been just as catastrophic for householders, farms and businesses as in previous major flooding incidences where Government aid had been forthcoming.

Bit by bit we put the package together. North Yorkshire County Council will be given £3m for to rebuild bridges and roads – the single biggest cost the community faces. Affected farmers will be able to apply for grants from a Farming Recovery Fund (FRF) totalling £2m for their uninsured losses. The two local councils – North Yorkshire County and Richmondshire District – the police, fire service and the Yorkshire Dales National Park will be able to apply for funds to cover their extra costs.

The Farming Minister is working through the details of how the FRF will work and I’ll be monitoring the whole support package to ensure it meets the needs of those affected as much as possible.

My team in the Northallerton constituency will continue to work on individual constituent’s issues and are out and about in the affected areas.

A really important message now is that the Dales are open for business as the traditional peak of the tourism season is reached.

In the last couple of weeks my parents discovered that is very much the case, passing through the heart of the worst-hit areas while doing the famous Coast to Coast Walk, stopping in Keld, Reeth and Richmond on the way. Despite all the difficulties some accommodation providers face, they were given great welcomes and had the privilege of attending the Marske Choir flood relief fundraising concert in Reeth held on Tuesday of last week.

With the importance of tourism in mind, I was very glad to hear that this year’s Reeth Show will be held as usual on August bank holiday Monday. That is great news and a tremendous signal to send to the outside world that this corner of the Yorkshire Dales is very much welcoming visitors. All credit to the organisers and the Yorkshire Young Farmers who put in such sterling work to clear the showfield of debris at Fremington.

I intend to attend the show and I hope many constituents will also make the trip up the Dale to show solidarity with a community fighting hard to get back on its feet.