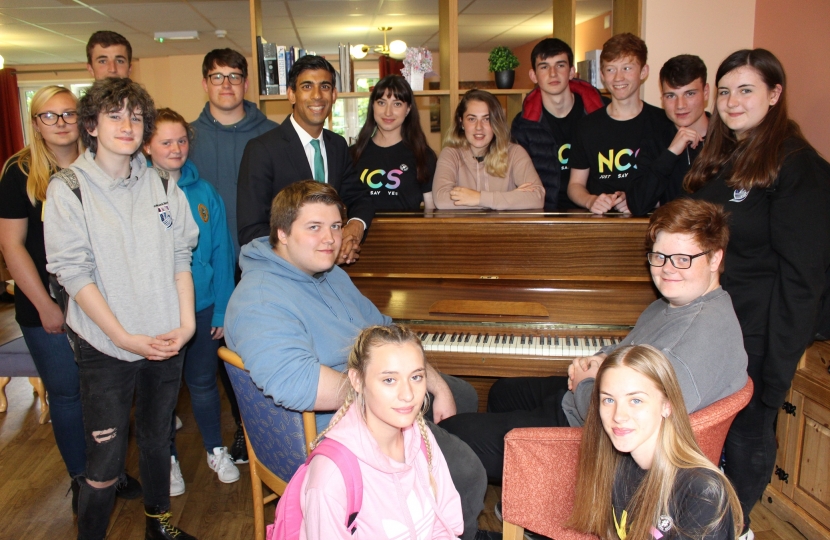 One of the most inspirational moments of my summer was spending time with a group of young people who had decided to spent part of their holiday improving the lives of older people.

The group of 16-17 year-olds drawn from Richmond School and Sixth Form College, Risedale Sports and Community College, The Wensleydale School and St Francis Xavier School, Richmond, were on a National Citizen Service programme – a Government-funded personal and social development scheme which I am very keen to promote.

The group of very enthusiastic youngsters were in the last few days of their three-week spell on the programme which had seen them take part in a range of activities designed to stretch them but also be great fun.

They had been on an adventure week overcoming challenges such as mine exploration, raft building and an expedition. A discovery week had seen them working as a team to cook for themselves, take part in public speaking with daily debates, do some community asset mapping in Leeds and join a ‘hackathon’ learning about computer coding.

They also planned their social action project for the final week which is when I caught up with them.

Because many of the students had first-hand experience of the impact of dementia on older members of their families they decided they want to help and came up with an idea of raising the money to find and purchase a piano for the Rosedale Care Home in Catterick Garrison – re-kindling musical memories are a known aid in combatting the advance of dementia.

They raised the money in a variety of ways – including by holding bake sales – found a secondhand piano on Facebook and arranged to have it delivered to the home where I saw it in action being used to entertain the home’s grateful residents.

Richmond School students Nick Chapman and Joe Hughes proved to be very accomplished pianists, playing a huge variety of request tunes – including my request for a Star Wars movie theme!

It was a great example of how the programme can give young people the chance to make a positive impact in their communities while enhancing their CVs and developing vital skills for work and study.

It gives 16 and 17 year olds from different backgrounds a unique opportunity to make friends with new people and face new and challenging experiences on residential weeks away from home and then work with businesses and local community organisations to design and deliver a social action project on an issue that matters to them.

NCS is almost entirely funded by Government to the tune of £180m a year and since its launch by former Prime Minister David Cameron in 2010 more than 400,000 students have benefited.

Having seen the programme working around the constituency and hearing from students how rewarding it has been, I’m a huge fan and I have urged local schools to promote the programme. Richmond School is a beacon school having been awarded a gold champion award earlier this year for encouraging its students to take part in NCS, with assistant headteacher Sandra Johnson spearheading the programme there. This year around 60 of its students took part.

There is limited availability on another North Yorkshire programme starting in next month’s half-term but many places are available next year. I would urge students, encouraged by their parents, to find out more at ncsyes.co.uk.