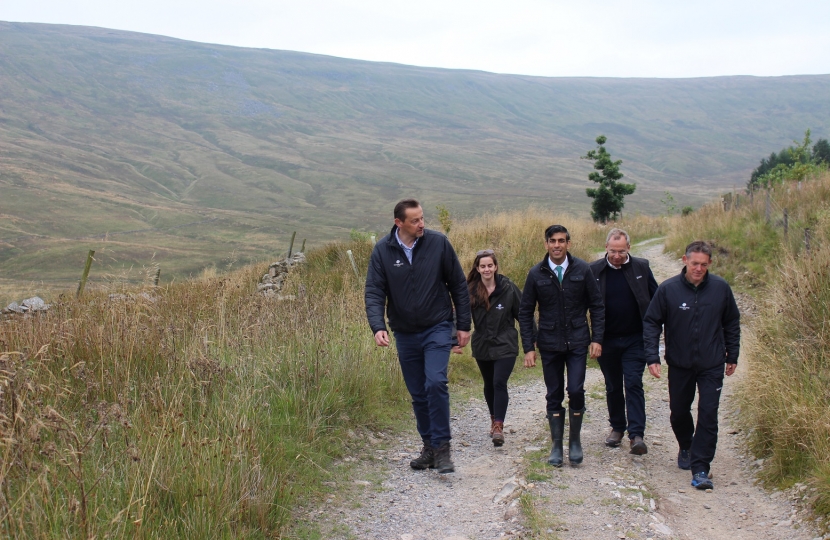 With the UK having hosted the COP26 climate change conference in Glasgow earlier this month, I thought it was an opportune moment to remind readers of the tremendous efforts to tackle global warming already in progress in our area – with the Government’s support.

In the six years I have been your MP I have seen a number of really important projects which address climate change and one of the ways it affects local people – namely flooding.

The role of the Yorkshire Dales and the wider Pennines is crucial in this work.

In September I saw the start of work on creating what will be, when complete, the largest stretch of woodland in the national park. The 250,000 trees planted by the Woodland Trust at Snaizeholme, near Hawes, will bring a number of biodiversity and wildlife benefits but its primary contribution to the battle against climate change will be through locking up carbon.

This woodland will be an important element of the Northern Forest, a massive project that will see 50 million trees planted over the next 25 years right across the North of England, backed by an initial government investment of almost £6 million.

Three years ago, just a couple of miles away from SnaizehoIme at Fleet Moss, I saw work underway on another big initiative – peatland restoration part-funded by the Government.

We have lots of peat in our Yorkshire uplands and this work – slowing the flow of water off the tops through dams and re-vegetation with heather and sphagnum moss – protects what is a vital environmental resource.

Peat holds twice as much carbon as a forest and damaged peatlands contribute more than ten per cent of the carbon dioxide emissions from the land-use sector.

These are big projects but there are many other smaller, linked, ones – in Bishopdale, for example – where farmers and landowners are working together on natural flood management measures which tackle climate change and lessen the flood risk to communities downstream. All of them are making a difference – locally and globally.

Last week there was good economic news with the latest unemployment figures showing a continuing fall – nine months in row now – and more people in jobs than before the pandemic.

It demonstrated that the Government’s Plan for Jobs has worked in protecting the country from the record jobless totals that some people feared and predicted.

I was particularly pleased to see we had passed the milestone of creating 100,000 Kickstart roles for young people.

I launched the Kickstart scheme last year funding high-quality job placements for those aged 16-24 at risk of long-term unemployment.

It’s worked really well and I have met many of our local Kickstarters. Like Ryan Wilson and Matthew Dixon at Chopsticks the community social enterprise in Northallerton.

Ryan and Matthew both completed their placements recently with Matthew being offered a permanent role at Chopsticks. Ryan, who undertook industry-standard forklift truck training during his Chopsticks placement, used that new skill and experience to gain a permanent role with another employer.

That’s exactly how the scheme was meant to work – transforming young people’s lives and enabling employers to find new talent.

Kickstart worked so well for Chopsticks that they have taken on a further two Kickstarters. There is still time for more employers to join the scheme. It is open until the end of the year.