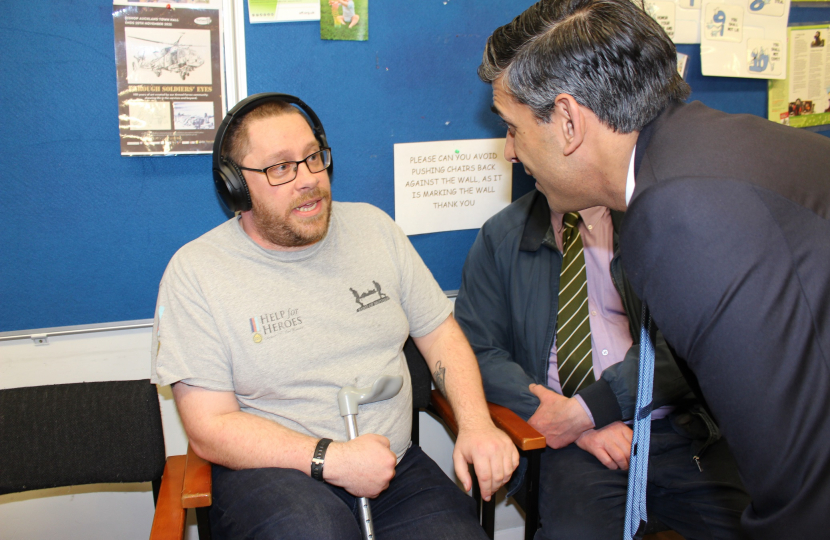 With two big military bases in our area, Armed Forces welfare and especially the Veterans who have served our Queen and Country will always be a priority for me.

So it was a particular pleasure to visit – and do the official opening honours – for a great new facility for our Veterans at Catterick Garrison.

The Veterans Information Hub, established by the Finchale Group charity in the Garrison Community centre, provides welcome additional support for the Veterans community every Monday.

I saw its work in providing practical advice and support to those making what can be a very difficult transition from service life to Civvy Street.

At the heart of what hub director Mark Hill and his team do is providing that companionship which is often hard to replicate for Veterans after leaving the Armed Services family and its regular routines.

Like “tea and toast” at 10am, a British Army tradition which is retained at the hub because it is so familiar for those that have served.

The hub provides access to a huge reserve of support and advice from a variety of agencies including, for example, the local Jobcentre Plus, and opportunities to take part in team activities – from mountain biking to gardening and metal detecting.

I was hugely impressed by the energy of all those involved in easing the transition from life in the Services and the commitment that, just as on the battlefield where no soldier is left behind, no Veteran is left behind in making the adjustment to civilian life.

The hub is held at the Garrison’s Community Centre in Loos Road every Monday.

The Government is putting an additional £10m into developing mental health services for our Veterans – I announced this in last year’s Spring Budget – to ensure our Veterans and their families get the support they deserve through schemes like the Catterick hub.

Last Friday I was in the Garrison supporting Jag Sharma – a British Army Veteran standing in yesterday’s (5th) council elections – and we popped into Costa Coffee for a cuppa.

There we met 13-year-old Lewis who told me a fantastic story about his role in the Voices of Armed Forces Children Choir - many of whose members are from the Garrison.

On Saturday, the choir, which is made up entirely of children whose parents serve in our Armed Forces, had a starring role in the latest episode of the TV show Britain’s Got Talent. They were unanimously voted through to the next round by Simon Cowell and his fellow judges with a song – Welcome Home – co-written by Lewis!

I have to say the song – about their mums and dads coming home after service overseas – and the choir’s performance on Saturday night brought a tear to the eye. As they hopefully make further progress in the show I hope everyone will support them in the public votes.

Finally, spare a thought for two members of Catterick Golf Club who later this month will attempt to play 90 holes – that’s five rounds covering about 26 miles – in a day to raise money for Blesma – the charity which supports limbless veterans and celebrates its 90th anniversary this year.

Caroline Whitehead and Sue Marshall, the club’s Lady Captain and a veteran herself, tee-off early on May 25.  They have a fundraising page at www.justgiving.com/fundraising/carolinewhitehead4. Good luck to them both!