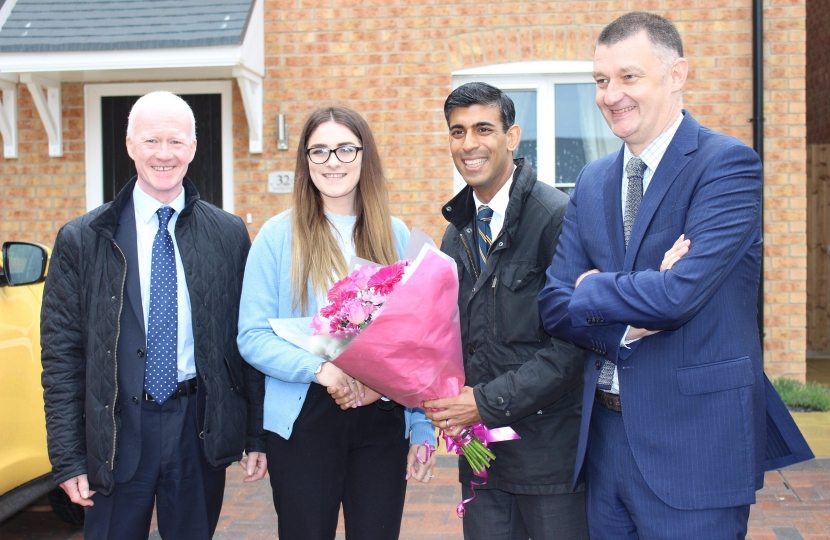 Like many readers, the day I took possession of the keys to my first home was one of the most memorable.

Along with going to starting my first job, getting married and becoming a father for the first time, it’s right up there as one of those rites of passage in the journey of life.

So few things give me as much pleasure in this job as having the chance to witness young people doing exactly the same thing, mostly recently in Colburn.

But today too many people are struggling to make this dream a reality. Young people are now half as likely as their parents to own their own home.

In the 1990s, a first-time buyer couple who saved five per cent of their wages a month would have a useful deposit in just three years. Saving at the same rate today would take you twenty-four years.

Since 1998, the ratio of average house prices to average earnings has more than doubled.  For too many people the housing market isn’t working as it should.

As a Minister in the Ministry of Housing, Communities and Local Government, I can assure you that the Government recognises the scale of the problem and the pressing need to tackle it.

There’s a range of measures now in place to help young housebuyers. Help to Buy Equity loans allow first time buyers buy a new-build home with only a five per cent deposit.

We are making it easier to get homes built with changes to the planning framework to speed up decision-making, and providing more resources to planning departments. Richmondshire has benefited from this last measure to assist with planning the growth of Catterick Garrison.

Homes England has been established as the Government’s strategic body for delivering more homes and it was good to see the important role it has played in helping to deliver recent schemes I have had the pleasure of opening in Colburn and Gilling West.

It’s also been very encouraging to see money from the £163m Community Housing Fund being put to good use to provide affordable homes to rent in Hudswell, near Richmond, and in schemes being pursued in Askrigg, Arkengarthdale, and Bainbridge. This was a fund set up by the Government specifically to helps areas like ours affected by high rates of second-home ownership.

The Government’s £5bn Housing Infrastructure Fund should help unlock land to provide up to 200,000 new homes, and councils and housing associations are being supported in their efforts to build genuinely affordable housing – backed by the £9bn Affordable Homes Programme.

These reforms are already starting to produce results. The number of first-time buyers is at an 11-year high and last year more than 217,000 new homes were delivered - the highest number achieved in all but one of the past 30 years.

Creating new homes in sensitive landscapes is particularly challenging but even so there were 270 housing completions in Richmondshire last year, way above the district’s local plan target of 180. That’s real progress.