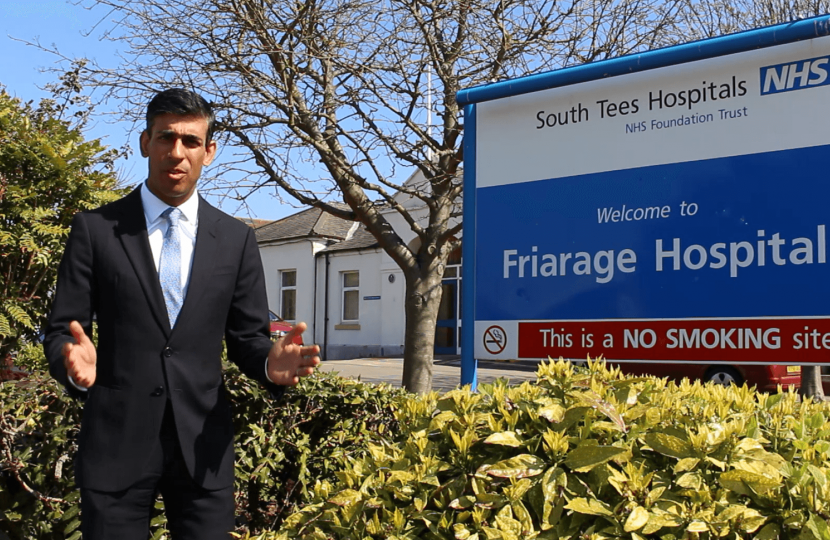 Rishi Sunak MP has urged health chiefs to maintain the hours of the 24/7 Urgent Treatment Centre which has been successfully operating on a temporary basis at the Friarage Hospital since March this year.

In an NHS consultation exercise about the future of emergency care at the Northallerton hospital, people are being asked for views about whether the centre should operate 24/7 (Option 1) or for 16 hours a day 8am-midnight (Option 2) over seven days.

It follows the Friarage’s managers having to make an emergency change to the A&E department in March this year when it could not fill the doctor rotas to staff the department safely. The 24/7 Urgent Treatment Centre has operated since.

The South Tees Hospitals NHS Foundation Trust has struggled to recruit emergency doctors to work at the Friarage for some time because of changes to doctors’ training, leading to greater specialisation, and developing clinical standards in critical care.

Doctors with general skills in anaesthesia and critical care who retired or moved on could not be replaced by doctors with similar skillsets.

Launching the consultation last week, the Hambleton, Richmondshire and Whitby Clinical Commissioning Group (CCG), which buys local hospital services for patients, said reverting to the old A&E arrangement was not a viable option because the hospital trust could not recruit the specialist doctors to man it.

The CCG said it would be “dishonest” to include a reinstated A&E as an option in the consultation because it could not be delivered safely.

Mr Sunak said that was regrettable but his own independently-commissioned research into the doctor recruitment issue had confirmed that it was real and shared by many other small hospitals around the country.

He said the difficulty in persuading emergency doctors and anaesthetists to work at small hospitals was well-documented and not easily resolved. Substantial financial incentives had failed to attract suitably qualified doctors to unfilled vacancies.

Many small rural hospitals, often considerably larger in terms of the numbers of patients treated, had adopted new care models in response.

The enhanced urgent treatment centre open 24/7 was the best possible option for providing emergency care for the Friarage, he believed, and could set the standard for effective and safe emergency care in small rural hospitals.

He added: “In recent months we have heard the doctors at the heart of the Friarage Hospital operation talk convincingly about the effectiveness of the emergency treatment arrangements they have put in place of what was an A&E department.

“While I appreciate the numbers of patients using the UTC between midnight and 8am have been comparatively low, it is important that patients’ faith in their ability to be treated at the Friarage is maintained by ensuring this service is always available.

“The additional annual cost of providing the service overnight is substantial but I think this is a price worth paying to ensure patients across a large rural area have maximum access to what the doctors believe is a benchmark care model for small rural hospitals.”

Mr Sunak said his independent report on the situation at the Friarage, commissioned from healthcare consultancy Carnall Farrar, had flagged up the issue of 24/7 opening in the UTC. A reduction in opening hours overnight would mean that instead of continuing to treat more than 90 per cent of the patients who attended the old A&E, the figure would fall.

Mr Sunak added: “What makes the UTC model work is that the vast majority of patients are unaffected by the change from the old A&E. A 16-hour UTC would mean more patients having to make the journey to James Cook or Darlington.”