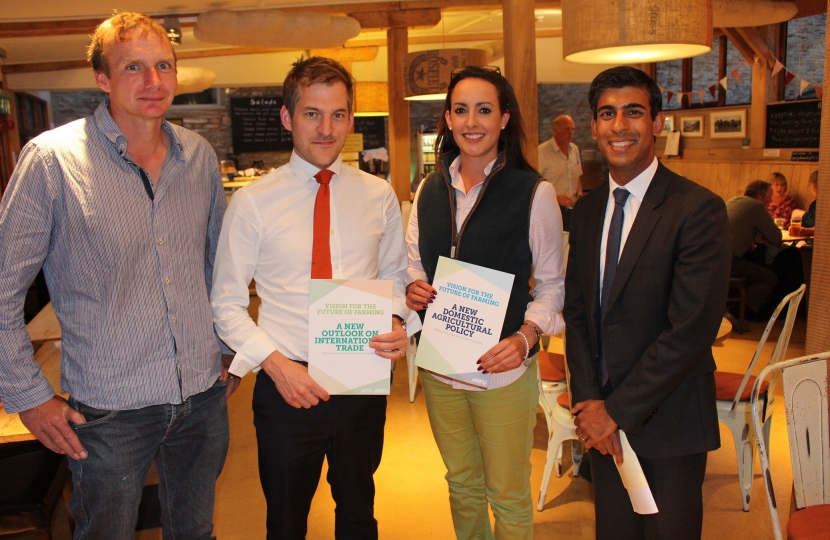 RICHMOND MP Rishi Sunak said he remained confident that the UK would secure a brighter future for British farming when the country left the EU.

Speaking at a meeting on the future of agriculture organised by the Leyburn branch of the NFU, Mr Sunak said that despite the outcome of the General Election he said he thought very likely that the UK would secure a good deal with Europe after Brexit.

He stressed that it would be important that a British Agricultural Policy delivered on what taxpayers wanted to see – a viable future for British farming which recognised the vital role they had not just in producing high quality food but also in delivering the environmental benefits which protected and enhanced the British countryside.

Mr Sunak said a free trade deal covering agricultural products was as much in Europe’s interest as the UK's.

“We must remember that Britain buys more than double the agricultural produce from Europe than it sells to it, something that also holds true individually for poultry, pork, beef and dairy, if not lamb,” he said. “That simple fact will dictate Europe’s approach to the forthcoming negotiations.”

He said part of the opportunity lay in the regulatory framework which could, after Brexit, be moulded to what was most appropriate for British farmers.

But he stressed that as Britain looked to develop markets in the rest of the world, maintaining the British farming industry’s high welfare standards would be paramount.

Mr Sunak said that he was delighted that George Eustice had been reappointed as Farming Minister following the election as he shared his view that welfare standards should be protected in any future trade deals and that British farmers should enjoy a level playing field, something that wasn’t the case even within the EU, notably and notoriously in the pig sector with the erratic enforcement of the sow stall ban.

The MP said he fully understood the need for migrant labour in some farming sectors and added that arrangements could and should be made to ensure British farmers were able to bring in the labour that they needed.

The meeting of NFU members, held at Berry’s farmshop in Wensleydale, was also addressed by Adam Bedford, the NFU’s regional director.

He agreed with much of what Mr Sunak said about the future for farming after Brexit but stressed that the NFU was seeking some specific assurances about the process of negotiating a new trade arrangement with Europe.

Apart from seeking a comprehensive free trade agreement that maintains two-way tariff-free trade in agricultural goods and avoided costly and disruptive customs checks, the NFU wanted transitional arrangements in place should a new trade deal not be in place at the point when the UK left the EU.