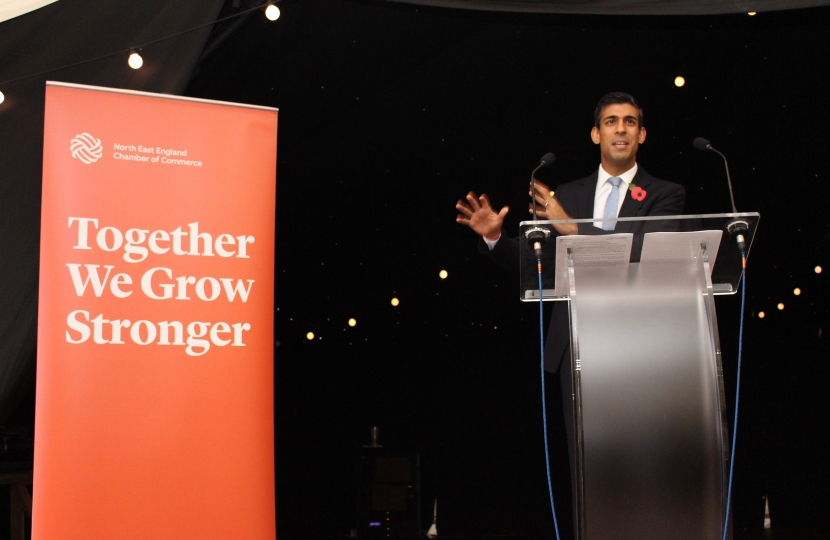 Government is backing business in the North-East and North Yorkshire to succeed, Richmond MP Rishi Sunak told a gathering of the region’s leading employers.

Mr Sunak said the Government was committed to giving business and industry the tools it needed to continue growing.

In a speech to the annual lunch of the Tees Valley and North Yorkshire branch of the North-East Chamber of Commerce, Mr Sunak said that while media attention often focused on large multinationals, it was small and medium sized businesses that really drove the economy

He described the gathering as “the risk takers, the innovators and job creators who are the backbone of our local and national economy.”

He said saw the Government’s role as “providing the human, physical and financial capital to power you to a greater future.”

He said: “When the Government came to power several years ago, a third of primary school children were leaving school not knowing how to read or write to the expected standard.

“Looking at all the OECD countries, we rank close to the bottom for the number of people with good technical level skills below graduate level

But good progress was being made, he said.

“New T-Levels are being developed and billions have been invested in new apprenticeships, increasing both the quantity and quality of this kind of vital non graduate education that we so desperately need.”

Mr Sunak, who is also the Minister for Local Government, said the UK’s “physical capital” – infrastructure - had been traditionally poorer relative to other countries, making it harder to create and expand businesses.

But that too was changing, he said, with the biggest investment in transport in the North for a generation.

The upgraded A1 and the dualling of the A66 in North Yorkshire alongside upgrading of the rail network in the North, delivering an extra 2,000 services a week and funding for a new train fleet for the Tyne and Wear Metro would make a real difference.

The expansion of London’s Heathrow airport would benefit Northern airports who would gain more domestic flight slots to improve links with the capital.

Digital infrastructure was even more important, he said. The £1.7 billion roll-out of super-fast broadband had reached 4.5 million homes and business that would otherwise have missed out.

Ninety-five per cent of premises now had access to super-fast speeds but the focus was now on connecting up the remaining five per cent.

He said: “I firmly believe that lower taxes create incentives and drive growth. We cannot as a country tax our way to prosperity.

The Government had reduced corporation tax, made it easier to employ people by cutting national insurance contributions through the employment allowance, and encouraged entrepreneurs with start-up loans.

And where the large banks were failing small and medium size customers, the newly-created British Business Bank and British Growth Fund were working alongside private lenders and investors to support a large number of growing companies.

Concluding, Mr Sunak said that in North Yorkshire he saw exactly the same drive, creativity, and ambition that he had seen during his business career around the world.

“We may be a rural area, we maybe in the North, but we have everything to be proud of.”