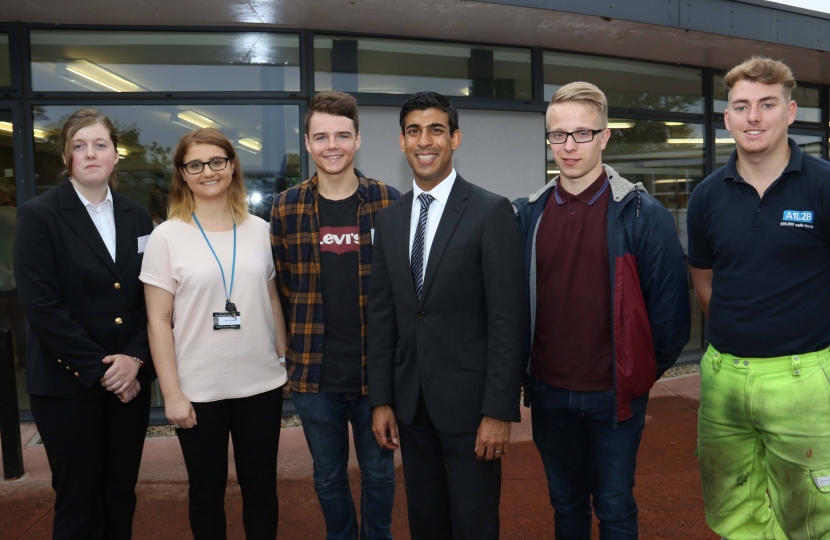 RICHMOND MP Rishi Sunak's pilot scheme designed to lift the esteem of apprenticeships to the level of degrees could now be rolled out nationally.

The Government is taking a close look at the programme which is being developed by Richmond MP Rishi Sunak with schools, including Richmond School & Sixth Form College.

Under the initiative, students who wish to pursue a career pathway involving an apprenticeship will be able to apply through UCAS, the normal route for securing university places.

“There should be no barriers to aspiration or success and if everyone could use the same system then automatically there is parity of esteem. The pilot has been very well received and the Government is now exploring the idea of rolling out the initiative nationally.”

Richmond School & Sixth Form College’s manager of careers and employability Liz Mannion said 375 students were due to go into work placements this year and the school relied heavily on local employers.

“Applying for university places is relatively straight forward because of the UCAS system,” she added.

“But applying for apprenticeships can be a minefield. The pilot will make it easier and also mean that everyone feels equal. We are committed to make sure our students achieve their aspirations, whether they are within higher education or apprenticeships.”

Former Richmond School & Sixth Form College student Sophie Hutchinson told the meeting how she had secured an admin and finance apprenticeship at her school, during which time she had been able to study accountancy exams.

“I always loved business but didn’t want to go to university,” she said. “This way I have been able to work in a job and still study university level courses, which has been brilliant.”