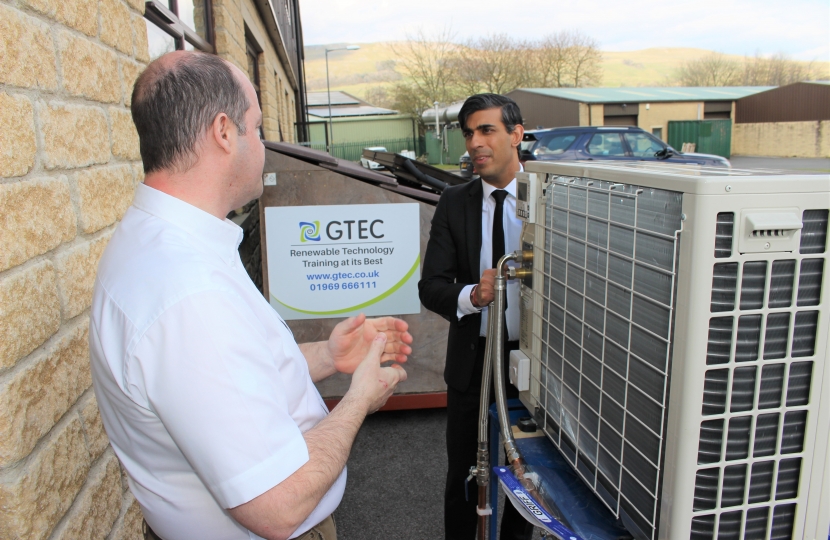 GTEC, a renewables training provider based in Hawes, explained to Rishi how it was creating the ‘green’ installers needed to meet carbon reduction targets.

During his visit, Rishi met local installers to find out how training was helping them, reviewed the range of renewable technologies available at GTEC – heat pumps, solar thermal with battery storage coming soon - and heard about the company’s recent successes.

At the end of last year, GTEC won a bid to provide heavily discounted training and certification to individuals and companies looking to upskill into heat-based renewables, backed by the Department of Business, Energy & Industrial Strategy (BEIS).

Named the Renewable Heat Installer Training & Support Scheme (RHITSS), the scheme offers vouchers which provide up to 70 per cent off the cost of becoming a renewables installer.

There are currently 1,000 individuals and 150 businesses signed-up to RHITSS – spaces that were filled within 10 days of the scheme’s launch. Vouchers can be used at GTEC and also other approved centres throughout the UK.

The Government’s Bounce Back Loan Scheme (BBLS) gave GTEC the confidence to put together the winning bid for RHITTS, a scheme which has created jobs in the local area – at GTEC and for the installers benefitting from the new business opportunities that the training has led to.

GTEC’s managing director, Griff Thomas, is a key representative for his industry, chairing the Decarbonising Housing Group for Richmondshire and having contributed to most of the national renewable technology standards.

Mr Thomas is also called upon for training advice from much further afield – he is currently working with the British Commission in India as part of the country’s drive to de-carbonise its cities.

Rishi’s visit coincided with confirmation from BEIS that the RHITSS scheme has had its deadline extended to the end of September 2021. The extension was granted in recognition of the difficulties that some candidates have had in securing a place due to Covid restrictions.

Rishi said: “Despite Covid, and with the knowledge that there is a framework of national funding support introduced by government, GTEC has really seized an opportunity and is now a key player in the UK’s national strategy to achieve Net Zero.

“The RHITSS scheme has been a great success; GTEC has been able to pull together many different parts of the low carbon sector to deliver this ambitious programme very quickly. It’s been great to meet a local company playing their part in such an important national cause.

Mr Thomas said: “It was a pleasure to meet Rishi and see his obvious enthusiasm for a low carbon future. We discussed the need for long-term and sustainable support to give to installers the confidence to invest in career development and the green agenda. The achievements of RHITSS is an example of what can happen when industry collaborates.”

Darren Jones runs a renewables installation company in the North Yorkshire, Cumbria and Lancashire areas. He said: “We’re seeing a lot of interest in renewables from the retrofit market – i.e. individual homeowners who want to make their existing houses green.

“The financial support we’ve benefited from through RHITSS is exactly the kind of incentive we need. It was an honour to show Rishi round some of the renewable technology we’re currently fitting in the area.”