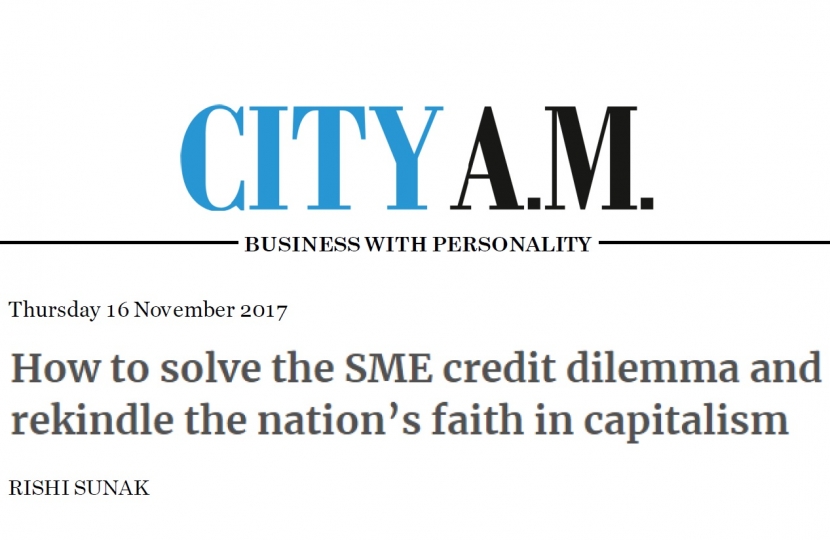 Generating more turnover than Brazil and employing five times as many people as Walmart and the NHS combined, there is no more powerful engine of prosperity in Britain than our SMEs.

But there is a problem. Britain has a world-class track record of creating new businesses. Yet when it comes to scaling them up, we are at the back of the pack.

The corporate credit markets are dominated by a few big banks. And since the financial crisis, they have been far more reluctant to lend.

The annual gap between what SMEs could borrow and what they are actually getting has been estimated at up to £35bn.

It doesn’t have to be this way. Firms in Europe get 80 per cent of their credit from the banks. But in the US, it’s only 25 per cent. Through capital markets, US companies can access a broader range of creditors, from pension funds to university endowments.

The UK does have an exchange, the Order book for Retail Bonds, to fund companies. But it is geared towards large firms issuing bonds of £100m at a time. It is simply too expensive and complex for SMEs.

The market is responding, with challenger banks and peer-to-peer lenders growing dramatically. But, as I argue in a new paper for the Centre for Policy Studies, we also need a new generation of retail bonds – sold by small businesses and bought by ordinary savers on a new Retail Bond Exchange.

There are clear precedents for this. As a more flexibly regulated alternative to the main Stock Exchange, AIM has been a huge success, enabling hundreds of SMEs to raise relatively small amounts of equity.

In Europe, there are several bond market equivalents already.

In Italy, the ExtraMOT exchange has seen hundreds of private companies raise almost €2bn, in average issues of just €8m.

An AIM-style market in bonds would be a boon to SMEs. And savers would also gain a quality investment alternative in an era of rock-bottom interest rates.

In a country where only 19 per cent of people own shares (compared to 55 per cent in the US), many more people could build a stake in the economy – a powerful way to combat the growing disillusionment with capitalism.

So what do we need to do?

First, the government should work with the London Stock Exchange and the Financial Conduct Authority to create the right regulatory framework.

Second, it should stimulate demand by offering tax reliefs (as happened with AIM) and allowing retail bonds to be included in Isas. The government could also issue more of its own debt on the new market.

Lastly, the British Business Bank should package up smaller SME loans into a larger portfolio that can be securitised. These bonds should be issued on the new exchange so that ordinary savers can enjoy the same opportunities as institutional investors.

A new exchange for tradeable bonds would give consumers a solid return and a stake in “Enterprise Britain”. And with enough capital behind them, it could help make today’s SMEs the giants of tomorrow.