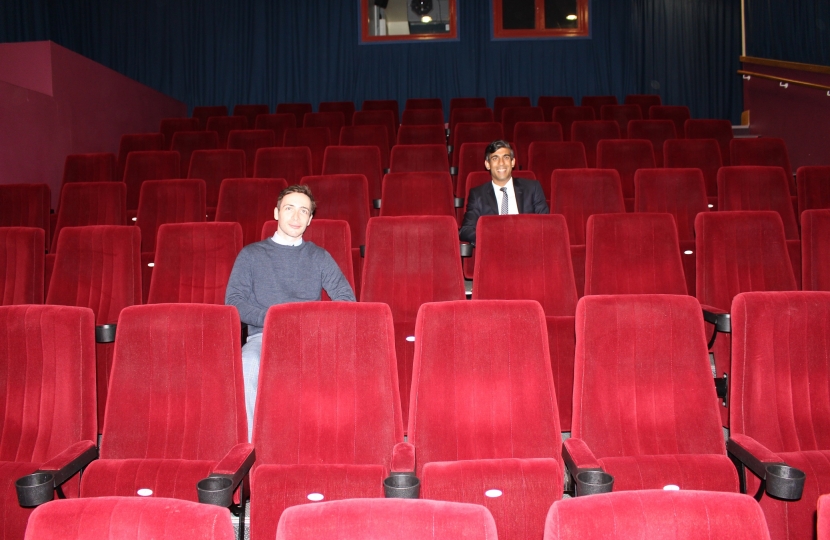 Rishi has said the award of a Government grant to the independent Station Cinema in Richmond to help it weather the Covid-19 pandemic is great news.

The three-screen cinema housed within the former railway station complex has been awarded more than £64,000 to make up for lost income and meet the cost of Covid-19 safety measures.

The cinema was closed in the spring and early summer of last year and had been open with reduced audience capacity. It closed again on New Year’s Eve as North Yorkshire moved from Tier Two to Tier Three restrictions.

Daniel West, general manager of the cinema, said: "It’s fantastic to receive this vital funding to see us through the current closure. We thank the British Film Institute which allocated the money on behalf of the Government and Rishi for his support for our bid.

“The outpouring of support from the local community and Richmondshire Council has been amazing in the current climate.

“The grant will go a long way to ensuring we continue to be a key cultural part of Richmond.

“2021 looks to be a fantastic year for film and we’ll be ready to welcome audiences back to be a part of it."

The Station is one of more than 200 independent cinemas across England being supported this winter with £16 million in grants from the Government’s £1.57 billion Culture Recovery Fund. Rishi supported the cinema’s application in his role as constituency MP.

In his letter to the British Film Institute – which allocated  the money on behalf of the Department for Digital, Culture, Media and Sport – Rishi wrote of the importance of the cinema to its local community and the anchor role it plays in The Station complex as a whole.

Rishi said: “As a Star Wars fan, I know there’s no better place to experience great films than in your local cinema and these grants will provide vital support for independent venues through this winter and beyond.

The Empire Cinema at Catterick Garrison received £7,800 from the fund.