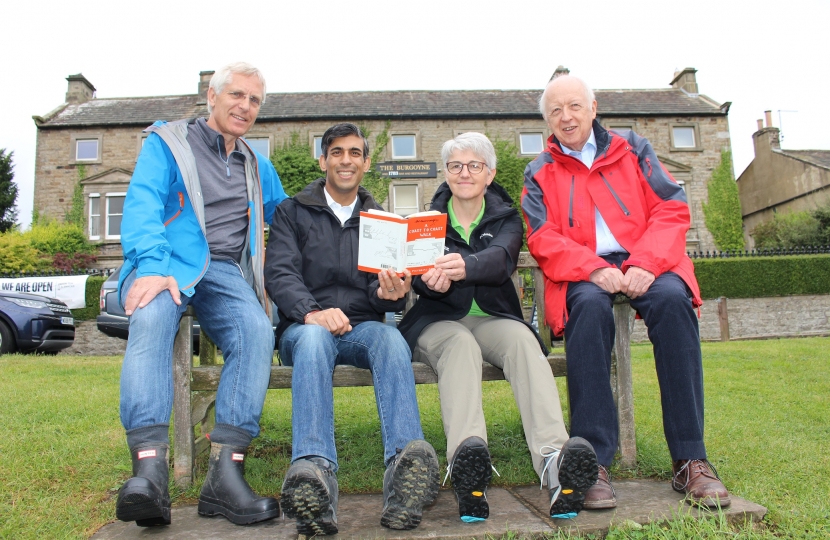 Rishi has welcomed the start of work on making the world-famous Coast to Coast Walk a National Trail - a major milestone in his campaign to ensure the route is officially recognised.

Work is now underway on preparing a proposal for National Trail designation to maintain and upgrade the long-distance path which brings thousands of walkers to North Yorkshire every year.

Rishi launched the Coast to Coast – Make It National campaign in 2016. Designation of the walk was included in the Conservative Party manifesto for the 2019 general election and resources allocated to it in last year's Autumn Statement.

The start of work by Natural England is a significant step forward his campaign - which was backed by more than 70 organisations and local councils along the route.

The walk, which runs for 190 miles across the North of England and through the heart of Rishi’s constituency, is widely recognised as one of the most scenic and beautiful walks in the world – but has no official status.

It was devised by the legendary fellwalker Alfred Wainwright and published as a book in 1973 but it has never been made a UK National Trail. Fifteen other long distance routes in England and Wales are designated National Trails and receive public funding for path maintenance, signposting and promotion.

Rishi said the designation would help develop further the walk’s appeal and boost the economy of a vast swathe of northern England the route passes through.

He said: “Like the Coast to Coast walk itself, this journey has been a long one but I am delighted that work has started on giving the route the recognition and the resources it deserves.

“The Coast to Coast – Make it National campaign received overwhelming support and I am grateful to the many organisations and individuals that have given their wholehearted backing to it.

“The Coast to Coast route is an important contributor to the visitor economy in North Yorkshire and Cumbria attracting walking enthusiasts from all over the UK, Europe and the rest of the world who use our hotels, B&Bs, pubs, campsites and shops.

“National Trail status will bring even more benefits in term of sustainable tourism growth. More Coast-to-Coasters means more tourism but without the traffic that visitors can generate.”

Rishi’s campaign has been supported by the Wainwright Society, custodians of the late fellwalker’s legacy, and endorsed from Wainwright enthusiasts. They include the broadcasters Julia Bradbury, former presenter of the BBC’s Countryfile, Eric Robson, the former host of the BBC’s Gardeners’ Question Time and mountaineer Alan Hinkes.

Mr Robson, who is chairman of the Wainwright Society, said: “The designation of Wainwright's Coast to Coast Walk as a National Trail has long been one of the Society's ambitions. The Walk is one of the country's most popular long-distance routes, and helps support businesses and jobs from St Bees to Robin Hood's Bay, including in some of the north's most sparsely populated rural communities.

“We very much welcome, therefore, the news that Defra has invited Natural England to submit a business case for establishing the C2C Walk as a National Trail. This is just the start, of course, of what will inevitably be a long and detailed process over the months and years ahead to bring the project to successful fruition.

“But this is a very exciting and important first step and we look forward to working with partners along the route to establish the C2C Walk as one of the UK's great National Trails. As Alfred Wainwright said of the walk he devised: ‘Surely there cannot be a finer itinerary for a long-distance walk!’ "

Cllr Yvonne Peacock, the county councillor for the Upper Dales and also a member of the Yorkshire Dales National Park, said the announcement was tremendous news for the area.

She said: “The Coast to Coast Walk is increasingly popular and it brings a great deal of trade to so many businesses along the route. National Trail status will enable the path to be improved in places like Nine Standards Rigg at the top of Swaledale where ground conditions can be very poor and also improve signage.”

The Yorkshire Dales National Park is one of three national parks the walk passes through.

Nick Cotton, Yorkshire Dales National Park Authority Member Champion for Recreation Management said: “The designation of the Coast to Coast as a National Trail is a key objective within our National Park Management Plan 2019-2024 and we’re delighted that this is now a big step forward to making it a reality.

“There’s a lot of work to do between now and next spring working with landowners and local communities as well as our neighbouring National Parks and Local Authorities, and of course Natural England who have the statutory responsibility for National Trails”.

Rishi celebrated the milestone in his campaign in Reeth – a popular staging post on the route.

At the Burgoyne Hotel he met owner Ian Hewitt who saw the hotel when he did the Coast to Coast Walk in 2017 and enjoyed a meal there during an overnight stop in the village. He decided to purchase the hotel after competing the walk.

Mr Hewitt said: “Recognition of the walk’s qualities, improvements to the route and additional promotion will help businesses like mine on the path.

“At the Burgoyne we pride ourselves on providing jobs for local people to assist the economy of Swaledale. This is great news for Wainwright walking enthusiasts and the many businesses that look after them.”