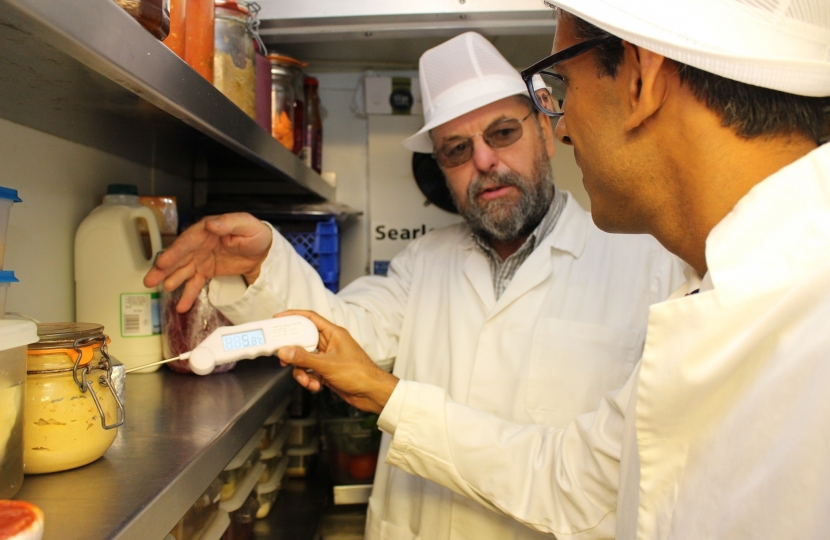 A current anomaly in the law means that while it is mandatory for hospitality businesses to publicaly display the ratings in Wales and Northern Ireland, it is not the law in England.

Mr Sunak has written to health minister Steve Brine about the anomaly and to request an update on the government’s policy.

His intervention follows a visit to the Sandpiper restaurant in Leyburn to see a food hygiene inspection take place.

The restaurant passed with flying colours, renewing its five (very good) rating but award-winning chef/proprietor Jonathan Harrison pointed out that while he was very proud to display his rating, other businesses serving food, who might not have as good a rating, or a poor one, did not have to display the inspector’s verdict.

Mr Sunak said: “It seems common sense that food hygiene ratings system should be as transparent as possible so that consumers are aware of how an establishment has fared.

“I understand that the Food Standards Agency, which runs the rating scheme with local authorities, is in favour of bringing England into line so I hope legislation ironing out this anomaly can be brought forward sooner rather than later.”

During his visit to the Sandpiper, Mr Sunak accompanied Richmondshire District Council’s food safety technician Graham Bourne in a tour of the restaurant’s kitchen and food storage and preparation areas.

Premises are inspected every two years unless a business is considered to be high risk where the inspection may be every six months.

The ratings system uses a scale of 0-5. Five is top of the scale and means hygiene standards are very good and fully comply with the law. Zero is at the bottom of the scale, and means urgent improvement is necessary.

All ratings are published on the Food Standards Agency website at www.food.gov.uk.

Mr Harrison said the inspection and rating system worked well and was not overly bureaucratic. He said: “The team here works hard to ensure we have the highest standards and I am very proud to display our rating prominently.

“It would encourage other establishments to take food hygiene as seriously as we do if they were required by law to display their rating.”

Mr Bourne said the vast majority of premises shared the high standards of the Sandpiper but anything that helped make the system more transparent would be welcome.