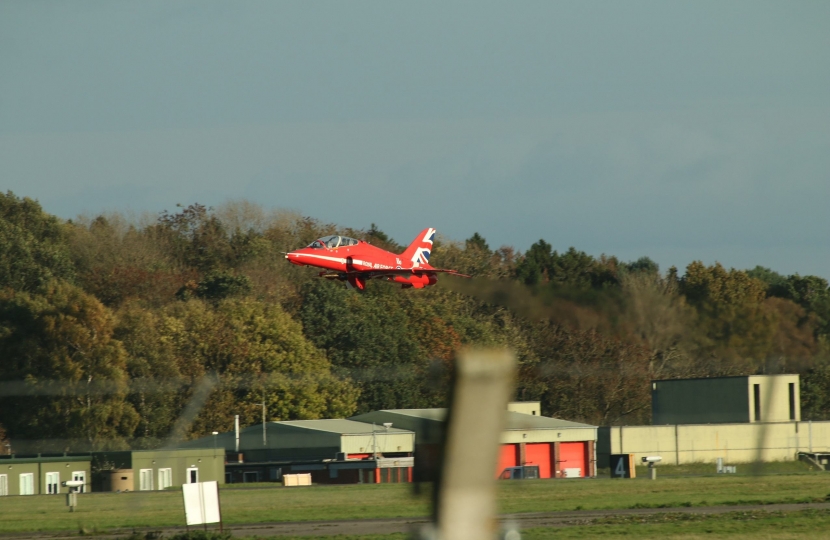 Support is growing for Rishi Sunak’s campaign to bring the Red Arrows to North Yorkshire.

The MP for Richmond is pressing for the Red Arrows aerobatic display team to be based at RAF Leeming when the team’s current base in Lincolnshire closes.

Sir Gary Verity, chief executive of Welcome to Yorkshire, the county’s tourism promotion agency, has thrown his weight behind the campaign.

And he is joined by a former RAF Leeming Station Commander in saying Leeming would make an ideal new home for the display team.

Sir Gary said: “I fully support Rishi’s campaign to bring the Red Arrows to RAF Leeming. Everyone in Yorkshire would be immensely proud to host these great ambassadors for Britain and our Armed Forces.

“It would be a major boost for the North Yorkshire area in particular and a great honour to have the world’s premier aerobatic display team based in the County.”

Air Vice Marshal (Rtd) Phil Roser, who headed up the base during its time hosting air defence Tornado F3s in the 1990s, said he believed RAF Leeming was a very good option for the Red Arrows and he had been “banging the drum” in support of the move.

He said: “It is a tremendous idea and I have been giving everyone I know the many good reasons, including those outlined by Mr Sunak, for the Red Arrows to come to RAF Leeming.

“As President of the Friends of Leeming Aviation Group, I am doing all I can to push for the Reds to be based in North Yorkshire in the future.”

The Yorkshire Society has also expressed its support, along with North Yorkshire County Council and the Mayors of Northallerton and Bedale.

The Richmond MP launched the campaign to bring the Red Arrows to Yorkshire following a decision announced in the summer to close their current home – RAF Scampton in Lincolnshire.

He says the squadron – made up of pilots, engineers and support staff – would be an “ideal fit” for the North Yorkshire airforce base.

In his letter, Mr Sunak said the base has significant advantages over its rivals, principally the presence at Leeming of 100 Squadron flying Hawk T1 fast jets, the same aircraft used by the aerobatic team for its stunning displays.

He adds that the North Yorkshire base has the capacity to accommodate the team having benefited from substantial investment in the past when it was home to two squadrons of Tornado fighter bombers.

In his response, Defence Estates Minister Tobias Ellwood acknowledged the points Mr Sunak made about RAF Leeming’s suitability and said these would be considered in the review of the possible base locations.