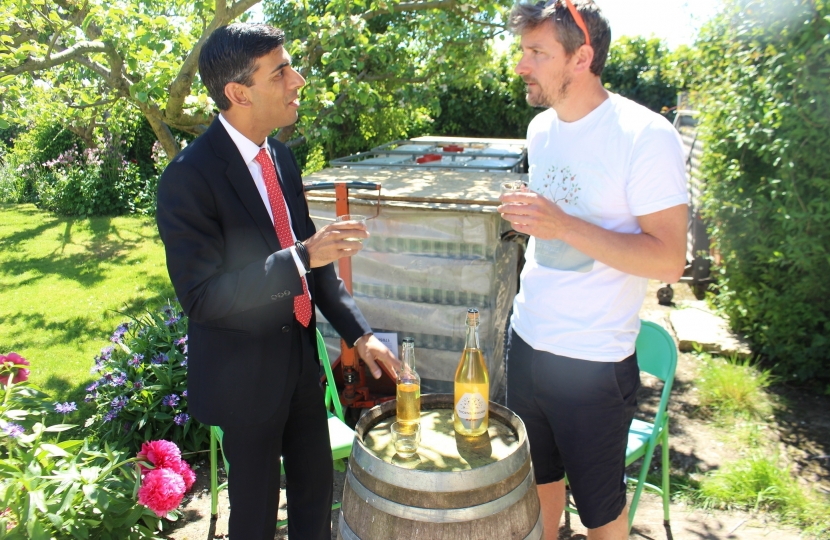 Rishi Sunak has welcomed a North Yorkshire cidermaker's plans to step up production as enthusiasm for the drink grows.

Thornborough Cider, based in the village of that name near West Tanfield, is increasing its output of cider made entirely of apples grown in Yorkshire.

Cider maker Kingsley Ash outlined his expansion plans to Mr Sunak during the Richmond MP’s recent visit to the business.

Mr Ash began producing cider in small batches at Thornborough six years ago and in 2016 planted a five-acre orchard just outside the village.

Planting is continuing as the orchard matures and during his visit Mr Sunak helped plant one more tree.

Mr Ash said his cider was hand-pressed and made from almost 100 per cent apple juice and no concentrate.

“Most sweet ciders from the big brewing companies are made with concentrate and to qualify as cider the apple juice content only needs to be 35 per cent of the total volume,” he said. “Our cider is made with 100 per cent apple juice, a tiny amount of sugar and nothing else.”

Mr Ash said his cider was dry unlike many of the commercial sweet apple and fruit ciders available. “We find that many people who say they don’t like cider do like ours because it is dry,” he added.

Thornborough Cider is a member of the Small Independent Cidermakers Association which runs an accreditation scheme for small producers making cider with a minimum 90 per cent apple juice content.

He said production would increase as his orchard continued to mature. He would also continue to take apples from nearby suppliers, many of whom give him their surplus fruit in exchange for bottled cider.

During his visit, Mr Sunak toured the cider barn where every autumn the apples are hand-pressed and the juice fermented for six months before being bottled for further maturing.

Mr Sunak praised Mr Ash’s approach to his business and his plans for growth.

“He has created an impressive brand based on the authenticity and Yorkshire provenance of his cider and I think he is very well placed to take advantage of a growing thirst for those qualities in the food and drink we consume. Overall, the cider market is growing rapidly.

“The taste of the cider is unique and I am sure Thornborough Cider will be able to tap into the enthusiasm for local produce in all its guises.”

Bottles of Thornborough Cider are available from local pubs, farm shops, restaurants and retailers, including Vennell’s restaurant in Masham, the Bruce Arms at West Tanfield, Lewis and Cooper in Northallerton and Yarm and the Cheese and Wine Shop in Darlington.

There are also a number of outlets in Harrogate, Leeds and York.