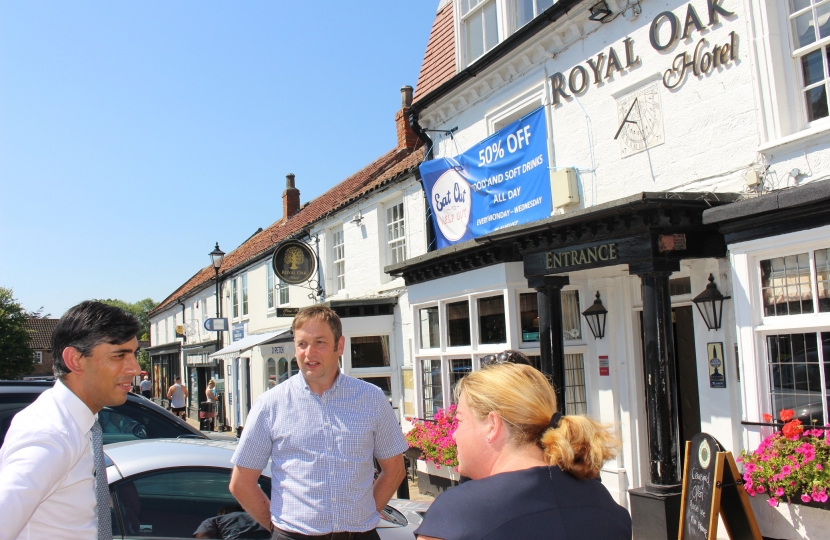 Rishi has welcomed the enthusiastic take-up of the Government’s Eat Out to Help Out scheme in North Yorkshire.

He toured hospitality businesses in Stokesley and Great Ayton at the start of the scheme – which provides a 50 per cent discount on food and non-alcoholic drinks up to a maximum of £10 per head served on Monday to Wednesday throughout August.

The businesses’ experience in the first week of the scheme has demonstrated that it has proved extremely popular with customers.

Rishi said: “I am delighted that people in North Yorkshire are eating out to help out in significant numbers. They are getting a good deal while supporting the jobs of many local people employed in this vital sector of our economy.”

Among the eating places Rishi visited was the Royal Oak in Great Ayton where landlord Simon Fletcher said the response from customers had been very good.

He said: “We were fully booked on the Monday, Tuesday and Wednesday and business later in the week when the discounts didn’t apply was still pretty good.”

Mr Fletcher said the Royal Oak had used the Government’s furlough scheme and had obtained a Bounce Back Loan and discretionary grant to help save 35 jobs.

At the nearby Poor House café bar – which only opened in February just a few weeks before lockdown – it has been a similar story.

Cherie Larkin, proprietor, said: “We certainly have benefited. We’d sold out of food by 4pm on the second day of the scheme.

“It has got us off to a great start after the worrying time when we had to shut up shop only five weeks after opening.”

At Chapters Deli, Bistro and Winebar, in Stokesley, co-owner Jane Ablett, said the early days of the week were now the “new weekend”.

She said: “Our turnover for the first week of the scheme was up year on year so we are very pleased with that. Our staff have enjoyed being busy. We’ve seen new customers come through the door so that is also a positive.”

The Eat Out to Help Out scheme is part of the government’s Plan for Jobs that will spur the country’s economic recovery from coronavirus.

The discount applies to all food and non-alcoholic drinks, with a maximum discount per person of £10. It could save a family of four up to £40 per meal.

More than 72,000 establishments across the country are participating in the scheme which runs until August 31. A 15 per cent cut in VAT for the hospitality and tourism industries runs until January 12, 2021.

Rishi has welcomed the awarding of a £90,000 heritage grant which will help secure the future of the Wensleydale Railway.