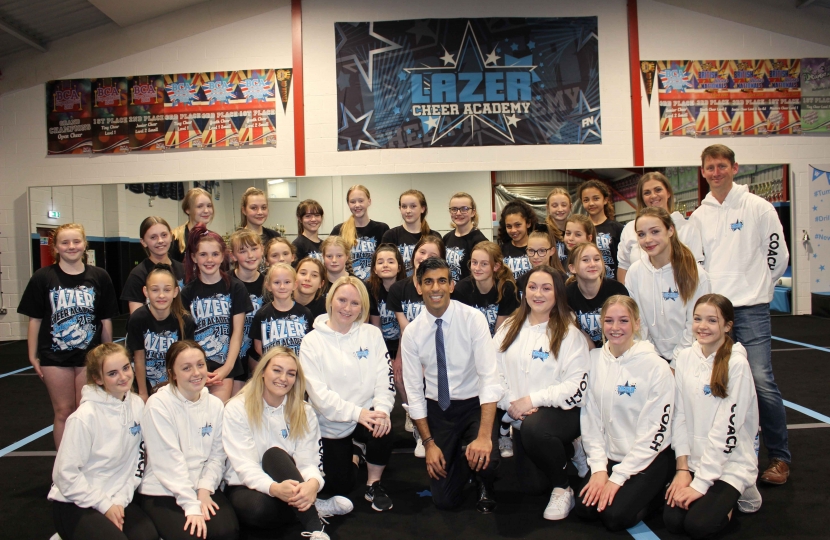 Rishi watched and briefly joined a training session of one of their 13 competitive teams who enjoy the high energy, team-based performance sport.

Rishi saw the Junior Level 2 team – Lazer Scarlet – run through their routines and took up the invitation to take part – in one of the pyramid exercises.

He said: “This is a tremendous sport blending dance and athletics, requiring individual skills and great teamwork. Watching them in training was inspiring and and talking to them afterwards their energy and enthusiasm was very evident as was the commitment of their coaches.”

Rishi was shown round the group’s dedicated centre on the Walkerville Industrial Estate in Colburn by Lazer Cheer’s joint directors Mandy Foreman and her daughter, head coach Chelsea.

Ms Foreman, who is also a coach, said the group had moved to its purpose-built premises from Colburn Leisure Centre earlier this year.

The group had grown consistently since it began 12 years ago. As well as the 13 competitive teams who have won competitions nationally and internationally, there are also recreational teams.

She said: “We loved having Rishi here to show him what we do and he was a great sport in agreeing to join in. The team was thrilled to have the chance to show him what a fantastic sport this is and how much fun we have.”

Ms Foreman said that following last year’s success at the Cheersport Nationals in Atlanta, Georgia, where its Lazer Royalty team became National Champions, the academy had its sights set on the World Cheerleading Finals in Florida.

More information about the group at www.lazercheer.com