Rishi helps villagers to protect landscape in A66 road upgrade 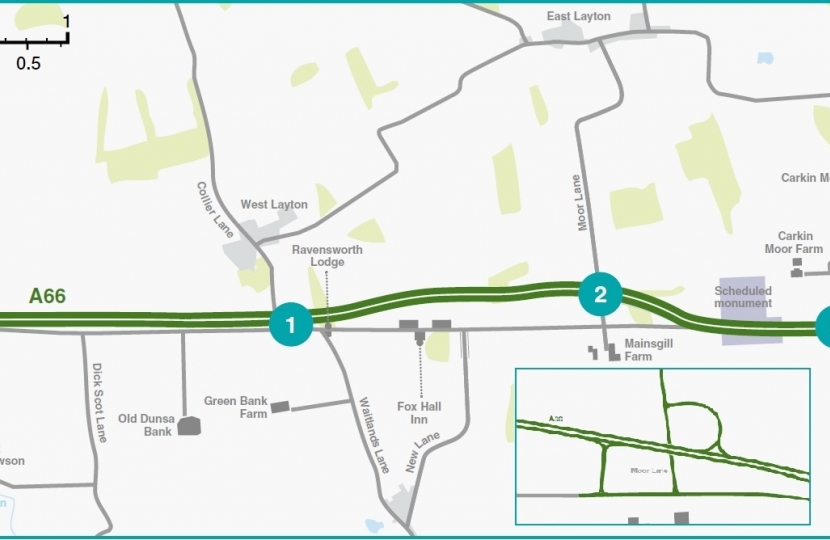 Rishi is assisting villagers in their fight to protect the landscape of a little-known Yorkshire dale during the upgrade of a major road.

He wrote to highways chiefs after being contacted by East Layton residents concerned about the visual impact of the £1bn dualling of the A66 Trans-Pennine road on the environment of Holmedale, the local name for the area which lies south of the existing east-west trunk route.

Rishi raised a number of issues with Highways England which East and West Layton Parishes had brought to his attention about the Stephen Bank to Carkin Moor stretch  –  including the height of the new dual carriageway and the visual impact of a new junction to serve the two villages.

Under revised plans for the junction close to Mainsgill Farm shop, the new road will be elevated over Moor Lane, the access road for East Layton.

Residents are concerned about the impact of the new road and junctions on the views south over Holmedale, the loss of tree cover and noise pollution.

In response, Highways England has given assurances about consulting local people about the location and design of the Moor Lane junction, that the elevation of the new dual carriageway will be no more than two metres and that residents’ views about landscaping will be taken into account.

Rishi said he was pleased that Highways England was listening to local people and it had committed to maintaining a constructive dialogue with their representatives.

He added: “This is a vitally-important road scheme for a key part of the nation’s infrastructure and particularly for the North of England economy. But it is also important that these improvements are carried out with due regard for the legitimate concerns of local people.

“The beauty of this landscape is something that our local communities wish to preserve both now and for the long term and we should do all we can to mitigate the impact of the upgrading project.”

She said: “The communities of East and West Layton and Carkin fully appreciate Rishi Sunak MP’s support in addressing our concerns and we look forward to working closely with Highways England to ensure that our beautiful dale is not adversely impacted by the A66 dualling “

A statutory consultation on the upgrading project is due to be carried out later this year when all parties will have the chance to formally comment on the final proposals for the seven stretches of single carriageway to be dualled under the scheme.