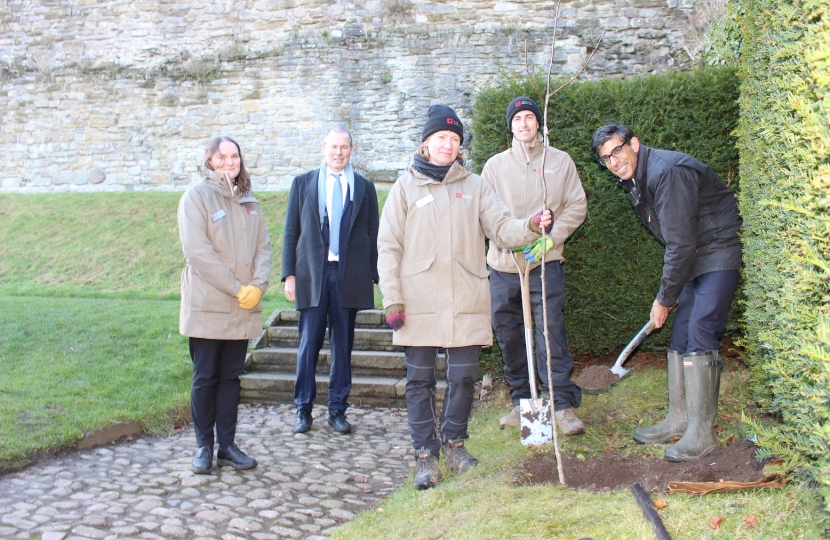 Rishi has planted a tree at Richmond Castle as part of a nationwide initiative to mark the Queen’s Platinum Jubilee.

He joined staff at the English Heritage attraction to plant a wild service tree (sorbus torminalis) in the shadow of the castle’s walls.

It is one of more than 70 trees being planted at castles, stately homes and abbeys owned by the heritage charity for the Queen’s Green Canopy.

The Queen’s Green Canopy is a unique tree planting campaign created to mark Her Majesty’s Platinum Jubilee in 2022 which invites people from across the United Kingdom to “Plant a Tree for the Jubilee”.

Rishi said it was a privilege to be invited to plant the tree at the Castle and play a part in creating a green legacy for future generations and honouring the Queen’s leadership of the nation.

“This is a beautiful spot in the castle grounds and a great location for one element of the Queen’s Green Canopy, a fantastic way of marking Her Majesty’s service to our country and creating a lasting legacy for the future,” he added.

James Taylor, English Heritage’s Head Gardener at Richmond Castle, said: “It was great that Rishi was able to join us at the castle to plant the tree ahead of Queen Elizabeth II’s Platinum Jubilee.

“Commemorative trees such as the one the Chancellor planted here bring history to life in a special way and remind us that the past is always present. This new tree at Richmond Castle will be enjoyed by visitors for many years to come.”

The wild service tree is a once-abundant but now relatively rare tree which produces white blossom in the spring and bright crimson leaves in the autumn.

Elsewhere in Rishi’s constituency, a Hawthorn tree was planted at Mount Grace Priory by children from Osmotherley Primary School.

Everyone from individuals to Scout and Girlguiding groups, villages, cities, counties, schools and corporates are being encouraged to play their part in creating the Queen’s Green Canopy by planting trees during the official planting season between October to March. Tree planting will commence again in October 2022, through to the end of the Jubilee year.

As well as inviting the planting of new trees, The Queen's Green Canopy will dedicate a network of 70 Ancient Woodlands across the United Kingdom and identify 70 Ancient Trees to celebrate Her Majesty’s 70 years of service.

More information about the Queen’s Green Canopy and how to get involved can be found at www.queensgreencanopy.org