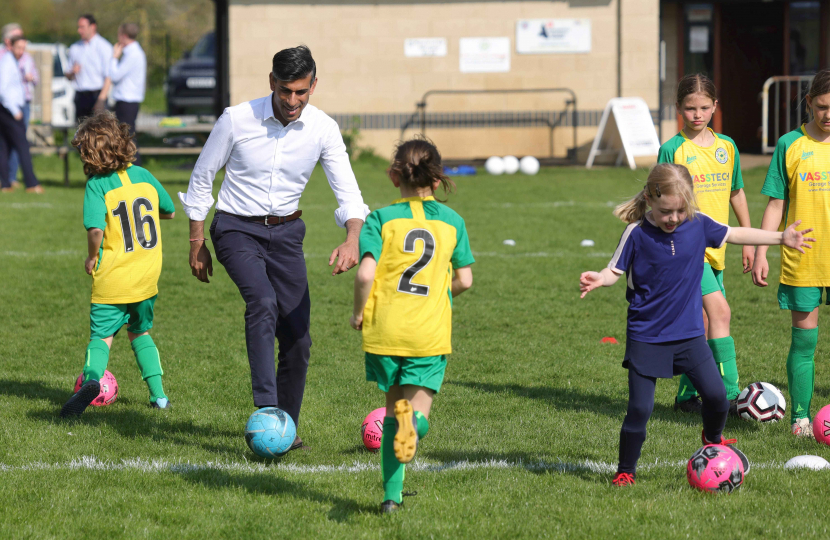 Following a series of improvements to the club's facilities financed through volunteer fundraising and Government-supported grant-aid – including new grass pitches in 2017 ­– the club has further ambitious plans to improve its clubhouse and is part of a consortium looking to bring a 3G pitch to the town.

The club has tripled the number of registered members since the existing clubhouse opened in 2007.

During a visit to the club at its ground at Dobson’s Field in Firby Road, Mr Sunak took part in a girls’ training session with members of the club’s U10s/12s and U14s teams.

He also met club officials, representatives of the Football Association and the Football Foundation, which funds grassroots football facilities across the country.

Rishi said: “What the club has achieved in engaging so many local young people in the nation’s favourite game is phenomenal given that the club is run entirely by volunteers.

“They have done an amazing job and the club’s plans for the future are equally exciting.

“It is also great to see so many young girls involved – across the age groups.”

With many of the club’s improvements being funded by Football Foundation grants, Rishi said he was pleased that last year the Government had allocated a further £230m for grassroots football facilities.

Among those attending the event was the new chair of the Football Association Debbie Hewitt.

She said: “What has been done here at Bedale Junior Football Club shows what can be achieved at grassroots level with Government assistance. Plans are in place for more investment in grassroots football facilities in this part of North Yorkshire.

“This is a big year for women’s and girls’ football, because England will be hosting the UEFA Women’s Euro 2022 this summer. We want to use the tournament as a springboard to inspire girls in North Yorkshire – and across the country – to play football.”

Since 2000, the Football Foundation (which is funded by Government, the FA and the Premier League) has made 185 grants for new football facilities in Mr Sunak’s constituency worth a total of £3.9m.

The latest round of investment will enable another 18 projects to go-ahead.

Alan Moodie, Chair of Bedale Junior Football Club said: “Recently we had over 600 children using our pitches as part of a District Schools competition, that would not have been possible without the grant support of Hambleton District Council and the Football Foundation which enabled us to buy additional land and convert for use as pitches. We have a team of dedicated volunteers but they can only do so much and grant aid is essential to build new facilities and upgrade existing ones allowing all children in the community to participate in grassroots sport.”

The search is on to find a new club sponsor to cover the next three years. Businesses interested in being associated with the growing, successful youth organisation should contact the club’s vice-chair Glyn Horner at glyn_horner@hotmail.com

More information about the club can be found via its website: www.bedalejuniorfc.com

With two big military bases in our area, Armed Forces welfare and especially the Veterans who have served our Queen and Country will always be a priority for me.