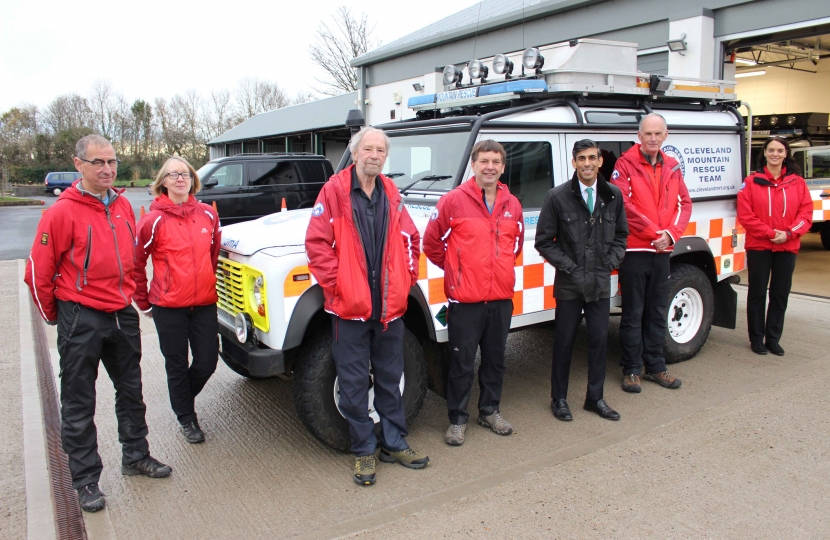 Rishi has thanked the Cleveland Mountain Rescue Team for their work in keeping people safe in the great outdoors.

He met members of the team at their base near Great Ayton.

The MP said the team, made up entirely of volunteers, did an amazing job.

“All of us who venture up into the Moors for recreation have reason to be grateful for the work of the team,” he said.

“Hopefully, we will never need their services but it is reassuring to know that they are on hand to mount a search and rescue mission if an emergency situation arose

“I was very impressed by their evident professionalism and commitment.”

Peter Smith, Team Leader, showed Rishi round the base which lies in the shadow of Roseberry Topping.

He was accompanied by Gari Finch, Cleveland MRT chair, Mike Gallagher, Deputy Team Leader and base manager, and other members of the team.

Mr Smith explained that the Team covered 400 square miles but the majority of their search and rescue callouts were to the North York Moors and popular spots like Roseberry Topping and Clay Bank, near Stokesley.

He explained that the Team had around 50 active search and rescue members and another 20 volunteers acted as Support Team members.

They came from a variety of backgrounds with a diverse set of skills – from doctors to teachers and lorry drivers.

All were volunteers, Mr Smith added. The Team had no paid staff and its services were provided free.

The cost of its vehicles, equipment and running costs were met by donations, corporate sponsorship, fundraising events and some grants.

Mr Smith said: “Cleveland MRT were very pleased to welcome Rishi to our Base near Great Ayton. He was very engaged with members during the visit, clearly grateful for the services that mountain rescue teams deliver and aware of the challenges that we face to self-fund our operations.”

As well as its core search and rescue, the Team works to support local communities, for example by using its vehicles during the height of the Covid-19 pandemic to transport bulk PPE equipment from Teesside International Airport to local authority care homes.

The Cleveland MRT is one of two civilian mountain rescue teams providing a service in Rishi’s constituency – the other being the Catterick Garrison-based Swaledale Mountain Rescue Team.