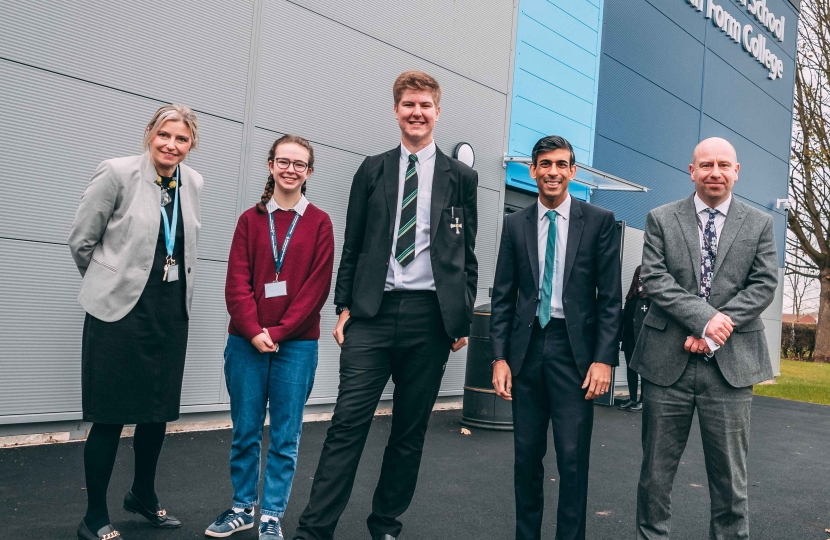 The redevelopment of the former Allertonshire School on two sites opposite each other in Brompton Road welcomed its first pupils in September.

The project involved a mix of demolition, new construction and refurbishment to make possible the relocation of the school from its former site in Grammar School Lane.

The new campus boasts state of the art teaching and learning facilities, including a purpose-built, freestanding, sixth form centre.

It has been built by a partnership between the Department for Education and the Areté Learning Trust, which also operates secondary schools in Stokesley and Richmond.

The work was undertaken by Moody Construction (Northallerton) and Portakabin (York), both local contractors. Many of the construction team were either former pupils or currently have children attending the school.

Speaking at the opening ceremony on the Arbor campus where he unveiled a commemorative plaque, Rishi outlined the great opportunities offered to the pupils and local community by the new campus as well as recognising the hard work and teamwork from the school staff and contractors to deliver the project on time.

He said: “This has been quite a journey but Northallerton now has a superb new secondary school which gives the staff and students a much better environment for learning and a much brighter future.

“Everybody involved in the project has done an incredible job of delivering it on time for the new term in September during a difficult time for major construction works. They all deserve our thanks.”

He added that he had been delighted to play a part by helping to secure a £8.7m grant for the redevelopment from the Department for Education.

After the ceremony Mr Sunak toured the new facilities with Head of School Vicki Rahn, representatives of the Trust and student leaders Eleanor Webster and Harrison Greenfield.

He also spent time with students on the Cuthbert campus, hosting a question and answer session. He fielded a broad range of questions from students about their concerns about the environment and reflecting on the support he had received from others throughout his career.