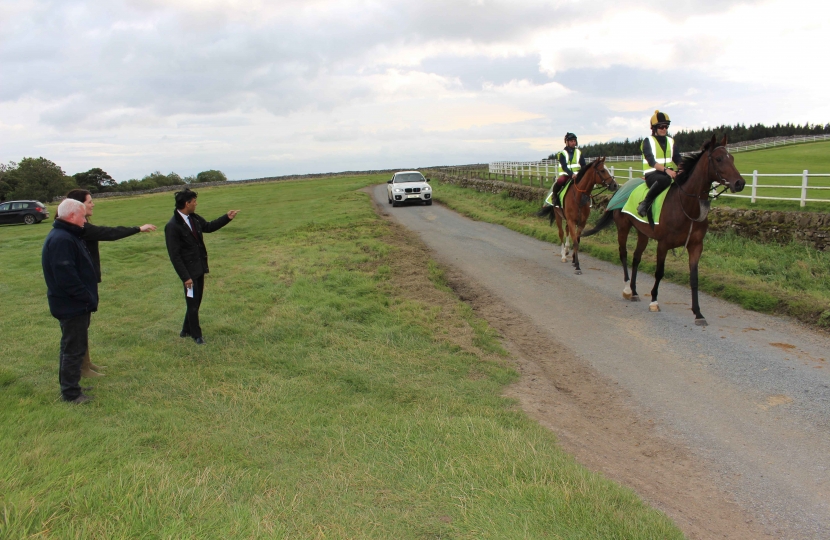 Rishi highlighted the importance of the horseracing industry to the Richmondshire economy during a visit to Middleham – the racing hub of the North.

He spent time with the town’s leading trainers and saw their world-class facilities during a tour of Mark Johnston’s base at Kingsley Park and on the High Moor gallops.

He saw some of the trainers’ best horses being put through their paces and the water therapy complex at Kingsley Park.

Among Middleham trainers he met were Kark Burke, James Bethell and Jedd and Andrea O’Keefe. John Gosden, the Newmarket-based champion flat trainer for 2019, also met Mr Sunak and talked to him about the future of the industry.

Rishi, who has attended the famous Middleham Open Days in the past, said the chance to see what he described as one of racing’s “centres of excellence” was invaluable.

He said: “We have a world-leading industry on our doorstep which we should all be very proud of. The training operations here contribute a massive amount to our local economy.

“That can be measured both in terms of the wages paid to the hundreds of staff employed by the various stables, but also the many businesses and the self-employed who supply services to the trainers.”

Mark Johnston said he and his wife Deirdre were grateful for the time Rishi had found to spend with them and the other trainers.

He said: “Rishi understands the importance of what we do here for the local economy and also in the context of the UK.

“Our operation has a turnover of £8m a year, a wage bill of £4m, and that has a big impact in a rural area like Richmondshire. Additionally, we bring many owners to the area from around the world who spend locally.”

Mr Johnston and Mr Gosden also spoke to Rishik about the need to secure the future of the industry in the future, making the case for further refom of the horserace betting levy.

The levy is collected by the Horserace Betting Levy Board from the gross profit of betting on British horseracing.

In April 2017, the levy was reformed to bring offshore bookmakers in scope for the first time and resulted in an increase of £45 million in income.

The money raised from the levy is given to the industry for improvements and to support breeding and veterinary science and education.

The British Horse Racing Authority has asked for an extension of the levy to bets placed in Britain on virtual and overseas racing and/or the introduction of a hybrid levy system - a combination of gross profit and turnover.

Rishi has welcomed the awarding of a £90,000 heritage grant which will help secure the future of the Wensleydale Railway.