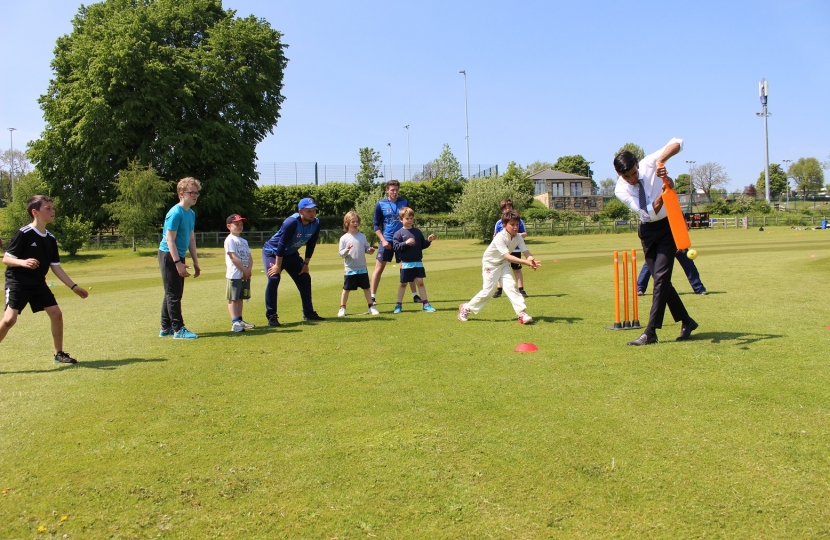 A partnership between Richmondshire Cricket Club and Richmond School and ML Sport Coaching which introduces more young people to the summer game has been praised by Rishi.

Rishi joined the young people taking part in a holiday coaching camp at the school run as part of a collaboration which gives the cricket club access to the school’s cricket ground in exchange for the club maintaining it.

A keen cricket fan, Rishi took part in the coaching session at the school, spoke to the coaches running it and the club’s new professional Ajay Mandal.

He also saw the club’s new electronic scoreboard part-funded by a grant from Richmondshire District Council. This will be used by both club and school under the partnership.

After facing a few deliveries from youngsters on the course and Ajay – a slow lefthand bowler with extensive Indian first class experience – Rishi said: “This is a great way of building young people’s enthusiasm for the game. They are clearly loving the experience – as am I!”

He added that the partnership clearly brought benefits for both school and club and they deserved great credit for making the most of their combined resources.

Richmondshire Cricket Club chairman Mark Layfield said it was a fruitful relationship and it had been a privilege to show Rishi the practical benefits of the partnership.

He said: “We loved having Rishi here to see the youngsters taking part in the holiday club and he clearly loves his cricket. Ajay was thrilled to meet him and then bowl to him.”

The holiday coaching courses are delivered by ML Sport Coaching founded by Mike Layfield, a member of the Richmondshire CC first team.

The cricket club continues to grow, organising competitive cricket for six men’s teams, a women’s squad and 11 junior teams which has put pressure on the club’s main ground in Hurgill Road.

The arrangement means that two grounds are available on a full-time basis throughout the cricket season.