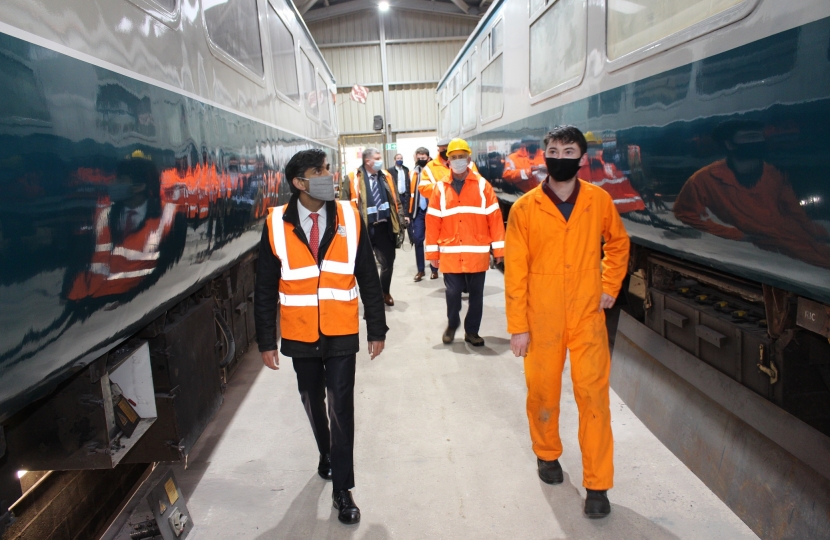 Wensleydale’s heritage railway has made good progress in its plans to re-open offering an improved visitor experience.

Despite being without any fare income since last March and the cancellation of its popular Christmas Polar Express trains because of the pandemic, the railway has used 2020 to press ahead with improvements to its track, rolling stock and station facilities.

It has received a major Government grant to help the railway get back on its feet.

The railway’s managers, staff and volunteers showed Rishi the work that is being carried out at Leeming Bar Station, the railway’s headquarters, to ready the railway for re-opening.

The railway was awarded  £90,000 from the Government’s Culture Recovery Fund to pay for repairs to the track, pay staff and employ additional cleaning staff for the deep cleaning of the carriages and to support social distancing measures when passengers return.

The Government grant and £50,000 from the National Lottery Heritage Emergency Fund will also provide Covid protection screens in eight carriages and recover the seats in two carriages which will allow them to come back into service.

Rishi said: “It’s been a very difficult year for the railway which plays an important part in the local visitor economy. I’m pleased to hear the support it has received will enable it to re-open safely and has allowed it to keep up its programme of maintenance and improvement.

“The small team of staff and volunteers have done a magnificent job to keep the railway alive and then make it ready to welcome back passengers as and when that is safe to do so.”

The improvements included exterior repairs and the development of an extensive education and community engagement programme along with the provision of heritage-themed activities.

Leeming Bar Station dates from 1848, when the line was first built and linked to Northallerton. It features a classical portico entrance facing the old Great North Road.  Passenger services ended in 1954 and freight shortly after.

Threatened with demolition in the 1960s, the station was designated a Grade II-listed building, which protected it from destruction. It suffered neglect and unsympathetic alterations until it was purchased by the Wensleydale Railway in 2002 and re-opened as the tourist and heritage line’s headquarters.

The work, which started before the spring lockdown, was completed on time. The roof and exterior has been extensively renovated, with the windows replaced to give an authentic 1920s appearance. Inside the rooms have been refurbished. The ground floor is to be a booking office and heritage waiting room and education area with the upstairs being used for offices and storage.

Now the staff and its team of volunteers intend to immediately start work decorating the inside of the offices and public area prior to developing the heritage and education spaces.

Carl Les, deputy chairman of the Wensleydale Railway, said “We were very pleased to welcome Rishi to the Leeming Bar site.

“Heritage railways by their very nature are expensive to run as the rolling stock and infrastructure is old and costly to maintain. We rely hugely on volunteers giving of their time and their cash to keep going.

“That said, we are also a business, and the government’s pandemic financial support has been very welcome. We look forward to welcoming Rishi back in the future, when circumstances are better and we can take him and his family for a train ride back in history.”