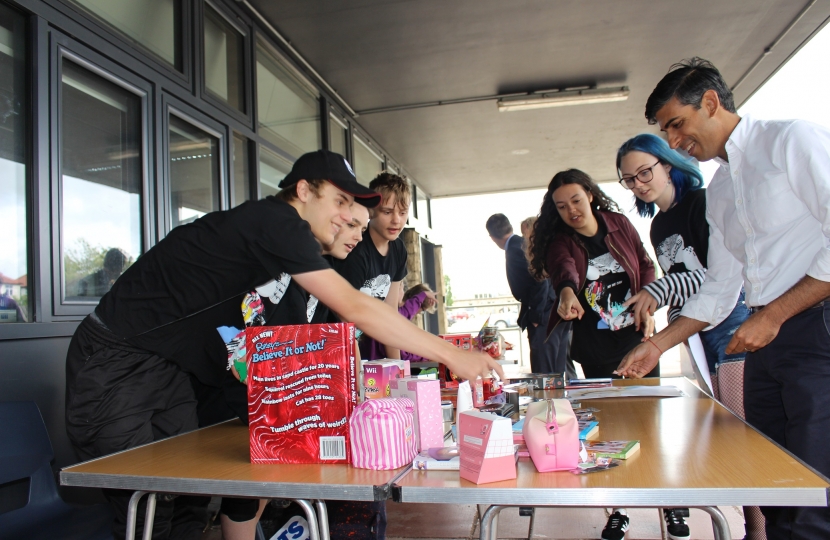 Rishi has praised the passion and commitment of a group of North Yorkshire school students who gave up part of the summer holiday for the benefit of the community.

The 30 students were taking part in the scheme which is designed to build skills and confidence in young people as they approach adulthood.

Two members of the group – Grace Kipling and Caitlin Briggs, both 16 – had written to Mr Sunak about their social action projects.

The students split into two groups to tackle two projects - LGBTQ+ awareness and a campaign to support mental health in schools following Covid.

Rishi said: “I was most impressed by the enthusiasm of the students for the projects - which were their own ideas - and the determination with which they pursued their objectives.

“They were also having lots of fun while doing so, getting to work together in teams and making new friends.”

Rishi spent time with the LGBTQ+ awareness group who had set up a number of fundraising stalls at the school’s Darlington Road entrance, including selling cakes and running a tombola.

Their aim was to generate enough money to cover the costs of creating a LGBTQ+ awareness mural at the bus stop opposite the school.

He also talked to the second group about their campaign to encourage schools and colleges to fund mental health support for young people after the pandemic.

They had created an online petition with the aim of securing a parliamentary debate on the issue and collectively completed 300 miles - roughly the distance from Richmond to Westminster - walking, cycling or on rowing machines and treadmills to raise money.

Grace Kipling, who worked with the LGBTQ+ group, said: “It was nice to talk to him about our project. We showed him around our stall and explained our campaign. He loved the fact that we were getting involved and are passionate about having an inclusive community.”

“It was amazing knowing that he is here to support us and help spread the word about our campaign.”

Georgie O’Reilly, who worked in the mental health project team, said the NCS experience had been amazing.

“I have been able to listen to so many people’s stories and understand how Parliament works, how petitions work, how to be able to have a voice and step out of my comfort zone and become more confident. It’s been amazing to meet a new group of people and see life in a different way.”

Mark Gifford, CEO of NCS, said: “We’re delighted that local young people were able to spend time with Rishi discussing the projects they’re passionate about and sharing with him the things that matter to them.

“Young people today want their voices to be heard and to play a part in building the future that they will inherit and inhabit, so being able to share with their local MP what they have been doing for their community on NCS was really special.”

Alex Hipkins, NCS Manager at Yorkshire Cricket Foundation which delivered the Richmond programme, said: "It was great to welcome Rishi to our NCS programme. He got to see first-hand the positive impact young people are making in the Richmond area.”