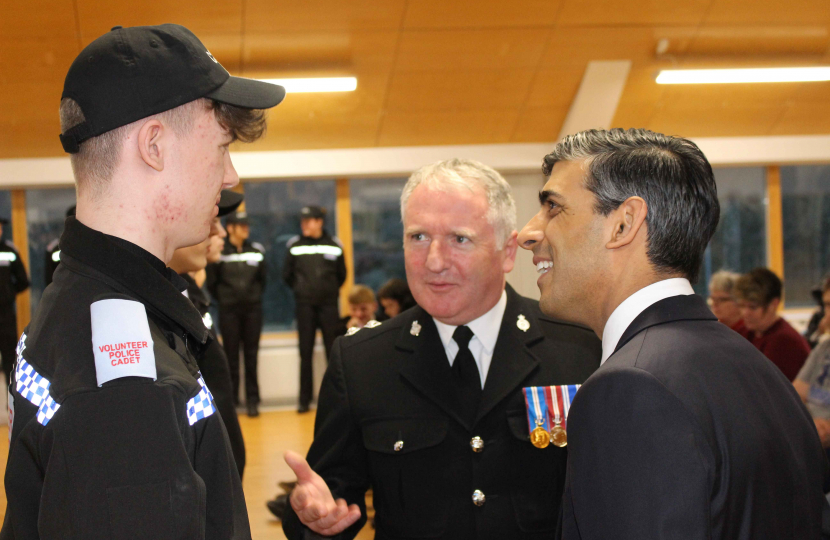 Rishi has praised the enthusiasm and commitment of nine young people who have volunteered to serve their community as police cadets.

The nine cadets were the stars of a passing out parade attended by Rishi and will now assist regular police officers with their duties in North Yorkshire.

The passing out event followed a 12-week induction which involved a weekly two-hour session learning about policing duties and skills, some basic law and physical activities and drills.

Now the cadets will be able to volunteer at least three hours a month helping regular officers with a range of local policing duties, including attending community events such as fairs and carnivals, and taking part in crime prevention and community safety events.

They will also continue with their training nights, gaining greater experience of different departments with the force including crime scene investigation, roads policing and the dog section.

Rishi said: “It was inspirational to meet a group of enthusiastic and committed young people who have pledged to help keep their local community safe and to take the first steps on what may be a full-time career as a police officer.

“Their families were clearly so very proud of what these young people have achieved already – and justifiably so. They are a credit to their local communities.”

“The cadet unit run their teams in their own time, continually working hard to make the cadets the best they can be. We are grateful for their commitment.”

The Catterick Unit Leader, Sgt Nadine Slattery, said she was always impressed by the week-on-week dedication of the young cadets

She added: “I am proud of the achievements of the Catterick programme with former cadets now securing both police staff and officer career roles.”