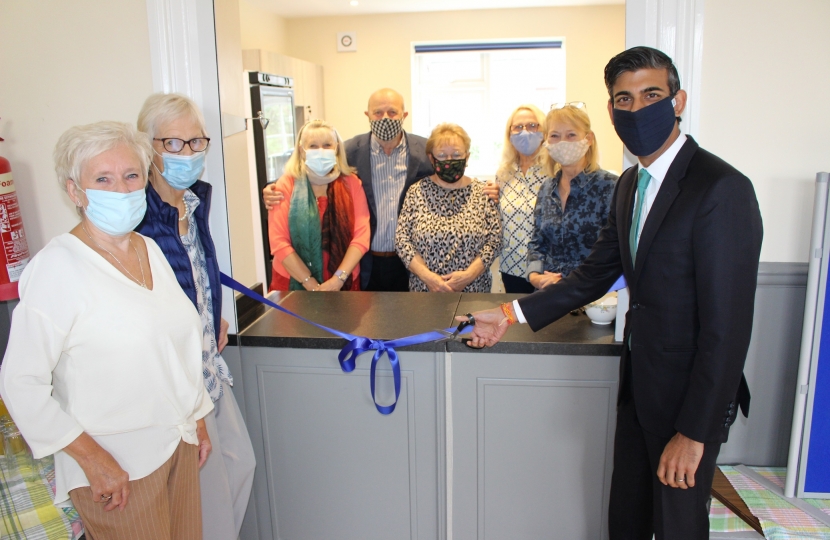 Barton residents celebrated the re-opening of their village hall with Rishi.

Rishi helped serve tea and cakes to villagers who had come to see the improvements.

Among the villagers he met was 99 year-old Joyce Bow who for many years was the village hall caretaker.

She said: “The hall looks absolutely wonderful now and it was lovely our MP could come and open it for us.”

Rishi said the villagers had done a fantastic job of updating the hall’s facilities.

He said: “The new kitchen and servery area is very smart and professional which I am sure will be appreciated by the villagers and the many groups that use it. I congratulate the village hall committee and everyone who contributed to an excellent community project.”

Village hall committee member Debbie Gibbs said the pandemic had offered an ideal opportunity to complete the works during the enforced closure.

“We now have a kitchen fit for purpose, fitted out to a commercial standard. Previously, our kitchen was behind our stage area which was very impractical for functions and impossible when the stage was being used.”

Mrs Gibbs added the committee was very grateful to Rishi for making the re-opening such an enjoyable occasion for the village and the many organisations  and villagers who contributed to the cost of the works.

The charities that made donations included the Garfield Weston Foundation, the Jack Brunton Charitable Trust, the Rowlandson and Eggleston Trust, and the Bernard Sunley Foundation.

The committee was also assisted by The National Lottery Community Fund.

Rishi has stepped up the pressure on the Post Office and WH Smith to resolve problems at the Northallerton branch.