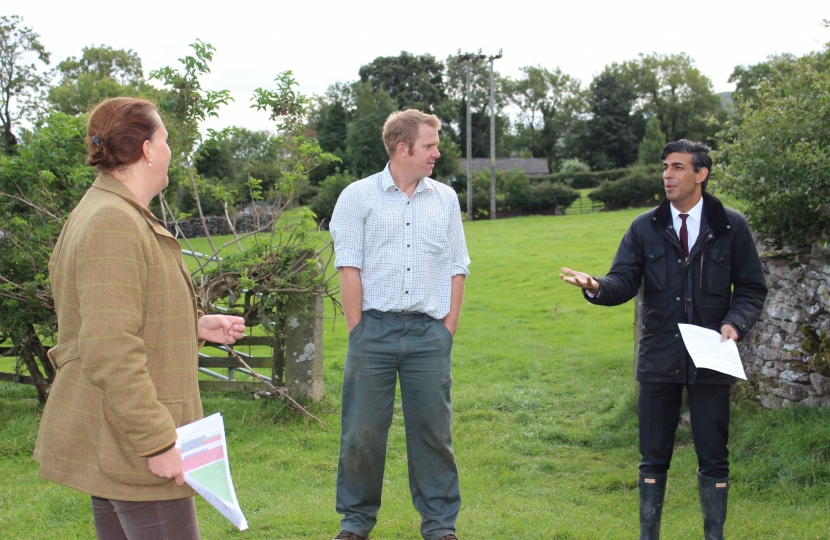 Dales farmers Paul Hunter and Caroline Harrison met Rishi and Farming Minister Victoria Prentis to explain how they are helping the environment while receiving farm support.

Paul and Caroline are two of 18 farmers in Wensleydale and Coverdale who are piloting a ‘payment by results’ agri-environment scheme, in which they get paid for conserving either traditional hay meadows or habitat for wading birds such as curlew.

The scheme is one of 67 Environmental Land Management scheme (ELMs) ‘tests and trials’ taking place in England.  Over the course of the next seven years, ELMs will replace Countryside Stewardship and the Basic Payment scheme.

The meeting took place in a meadow near the village of West Witton.  The ministers walked to the site and discussed the principles of payment by results with the farmers and representatives of Natural England and the Yorkshire Dales National Park Authority, which are running the pilot scheme in partnership.

Paul Hunter, whose meadows had twice the cover of wildflowers this summer compared with when the scheme started in 2016, said:  “The alternative for me to this pilot scheme would have been to plough up the meadows and re-seed with more productive grasses.  But this scheme has provided an income and it has given the decision-making back to the farmer.”

Caroline Harrison, who is managing a 30-acre pasture in the wading birds part of the scheme, had a clear message for the ministers: “We need to improve the way money is paid to farmers.  The approach in the past has been too prescriptive.

“We need flexibility and freedom to choose what needs to happen and when.  We know when the birds are going to nest – and it can vary each year – and can take out the cattle and sheep at the right time. Set dates are no good. Money helps, too. If there’s no money in it, people are going to leave hill farming.”

Rishi said the results of the pilot scheme were very encouraging. “The Dales look the way they do because of the work of farmers like Paul and Caroline so it is entirely right that they are rewarded for that work and that the scheme gives them more control and is not overly-bureaucratic.

“Nature-friendly farming which enhances wildlife but keeps the rearing and breeding of livestock viable is at the heart of what is being piloted here and clearly points the way forward.”

Farming Minister Victoria Prentis said:  “Yorkshire has a fantastic community of farmers, who are not only highly resilient but also working hard to test out how our upcoming Environmental Land Management scheme can be as effective as possible in rewarding our farmers for enhancing the natural environment.

“I look forward to working closely with more farmers, land managers and environmentalists like those I have met today from all over the country to design a scheme that will benefit the wide variety of farming systems we have in England today.”