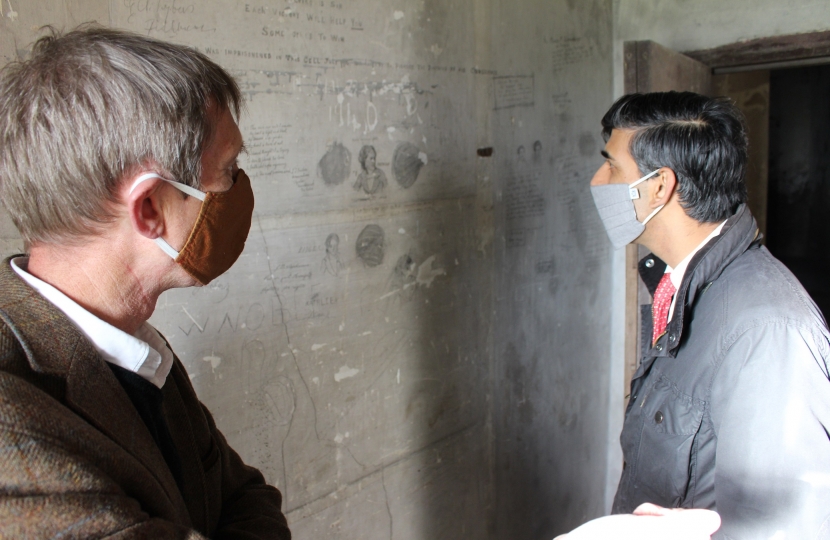 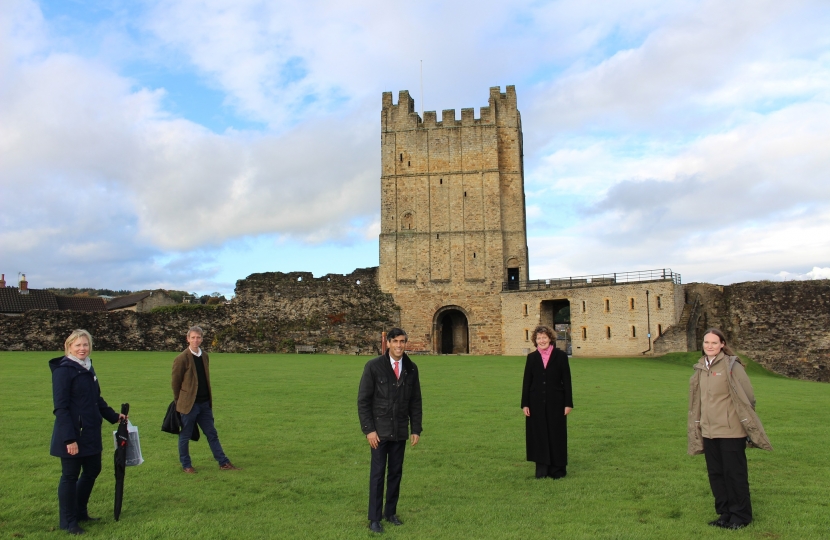 Rishi has welcomed the news that the public should be able to view an important but fragile part of Richmond’s history.

Heritage chiefs told Rishi that a four-year conservation project to save the graffiti on the cell block walls of Richmond Castle was complete.

The graffiti dates from the late 19th century to the 1970s and includes the work of conscientious objectors who were held in the cells during the First World War.

The conservation work reduced the amount of moisture in the cells to preserve the limewash plaster for as long as possible. Following extensive building repairs, a drier and more stable environment has been achieved.

Humidity, temperature and the moisture content of the cell walls continue to be monitored, tracking how they are affected by Richmond’s climate and even by people entering the building.

Kevin Booth, senior curator for English Heritage, which looks after the castle, said while the graffiti remains in a fragile state, it was planned to admit a number of small groups to the cell block in 2021.

He said: “We have to be careful but we do want people to see the illustrations and writings. The groups of five or six would have to be on booked visits and marshalled by volunteers but we believe we can provide public access while continuing to conserve these amazing insights into the lives of the people who passed through here.”

The story of the cell block graffiti, and the people responsible for them, is told in Richmond Castle’s new museum which opened last year. The names of the 400 conscientious objectors who objected to the First World War on moral grounds and were imprisoned or barracked in the castle are listed.

Rishi, who was included in a small group allowed to see the graffiti before the current Covid-19 restrictions were introduced, welcomed the opportunity for more people to see the inside of the cell block.

He said: “It was a real privilege to see the fascinating inscriptions and drawings which tells us so much about the authors and the events they lived through and how they shaped their lives.

“The work of English Heritage staff and the volunteers who contributed to the project over the last four years is tremendous, both in the way they have managed to stablise the physical state of the cell block walls and the research that was carried out on the individuals responsible for the graffiti which can be discovered in the new museum.”

Richmond Castle is currently open to visitors at weekends but only the outdoor spaces due to the current Covid-19 restrictions. Reduced admission prices apply. Visitors must book a timed ticket in advance online in order to visit.

Last month, English Heritage was awarded £2.9m from the Government’s £1.57bn Cultural Recovery Fund to assist with its work through the pandemic.

For the last seven months we have rightly celebrated the amazing contributions of key workers who have helped to keep our communities going through the most difficult period in this country’s recent history.