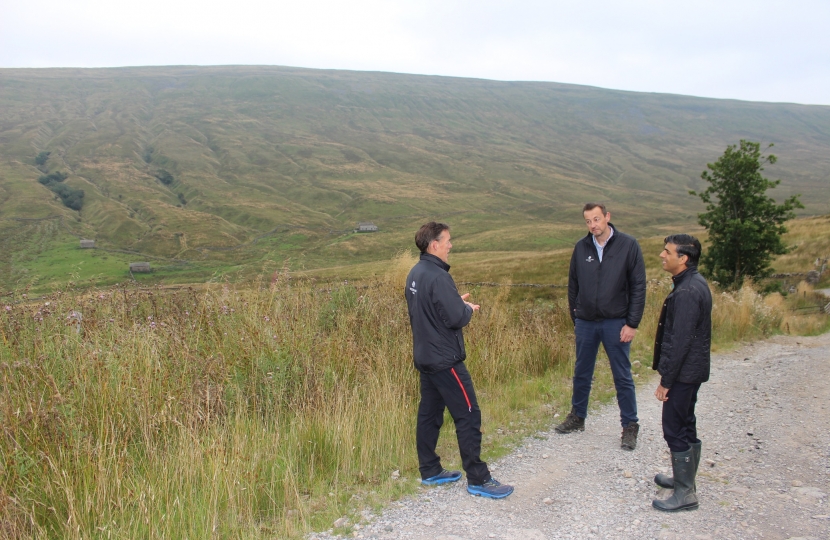 Rishi has acclaimed plans to create a huge new forest in the heart of the Yorkshire Dales.

He described the plan to plant 250,000 trees at Snaizeholme, near Hawes, as inspirational,

The Woodland Trust has acquired 550 acres of Upper Wensleydale for the flagship woodland creation project to benefit wildlife and lock up carbon to fight climate change.

When complete it will be one of the largest new woodlands within the Yorkshire Dales National Park and a major element of the Northern Forest – a project which has already seen 3.5million trees planted across the North of England since 2018/19.

The land sits alongside the existing red squirrel reserve and trail at Snaizeholme and the forest project should help to boost the numbers of the endangered species even further.

Staff from the Woodland Trust showed Rishi their plans during a walk through the purchased landscape which is currently mostly bare moorland.

Rishi said: “This is a quite amazing project taking shape in the heart of the Dales which will have so many long-term benefits for the immediate area and the wider environment and economy of the North of England.

“The planting of so many trees will really boost our efforts to tackle climate change, improve bio-diversity for wildlife and also help to combat flooding in other parts of Yorkshire. When complete it will be the jewel in the crown of the Northern Forest.”

The plans for the site also include repairs to dry stone walls to keep the landscape's character while providing corridors and shelter for wildlife.

There would also be ‘slow the flow measures’. Leaky stone dams built in stream channels will fight flooding, trap sediment and reduce land erosion while letting fish and crayfish safely slip through.

Newly-planted saplings would be protected from damage by deer and rabbits, ideally by moving away from all plastic or plastic free guards.

Funding for the land purchase has come from a number of sources including the trust’s public £3.5m Snaizeholme Appeal. The cost of planting the trees and other works will likely be covered by the Woodland Trust and Forestry Commission grants.

Alistair Nash, the Woodland Trust’s estate manager for Snaizeholme, said: “Our vision is to extend and protect the existing red squirrel reserve. We’ll link and buffer neighbouring woodland – patches of which we suspect are ancient.

“The tree-planting and habitat work is a golden opportunity to boost biodiversity. Trees will improve the water quality of the waterways, safeguarding otters and white-clawed crayfish, plus birds such as herons, grey wagtails, kingfishers and dippers.

He said the aim was to create approximately 65% woodland cover, a mixture of native broadleaved trees, including oak, birch rowan, alder and willows, forming an irregular woodland across the mid slopes of the valley, avoiding planting close to existing streams, stream gullies and wet flushes.

The Northern Forest is part of the Government’s 25 year Environment Plan and will see 50 million trees planted over the next 25 years from Liverpool to Hull, backed by an initial government investment of almost £6 million.

Spanning more than 120 miles between the cities of Bradford, Leeds, Manchester and Liverpool and covering North Yorkshire, the Northern Forest will help boost habitats for woodland birds and bats and protect iconic species such as the red squirrel – alongside providing a tranquil space to be enjoyed by millions of people living in the area.