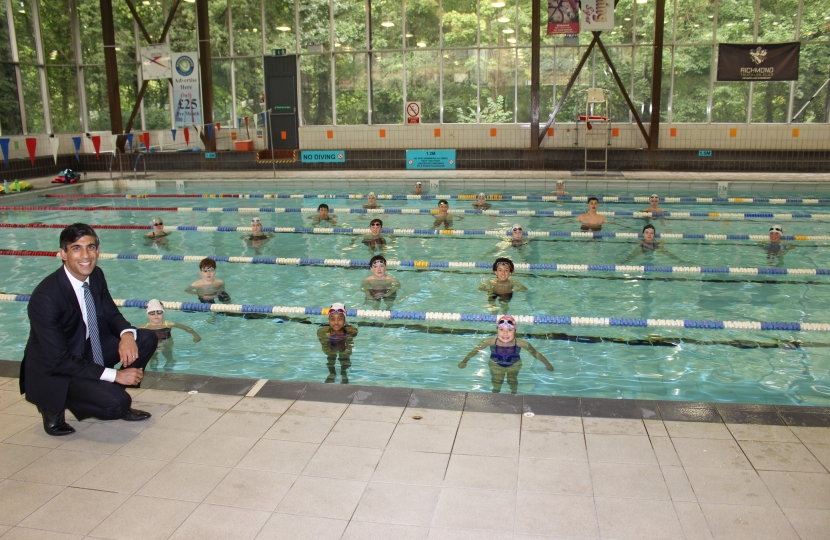 Richmond’s young swimming stars are back in training with Rishi's support.

The Richmond MP saw members of the Richmond Dales Amateur Swimming Club in action during one of their resumed training sessions at Richmond Pool.

The pool re-opened on July 25 and the club’s members were back very shortly afterwards observing Covid-19 safety procedures laid down their sport’s governing body Swim England in line with Government guidance.

Rishi said he very impressed with the organisation of the session to ensure that the young swimmers could arrive, take part and leave safely.

He said: “There was almost a military precision to the way the session ran and it was great to see the happy faces of the young swimmers as they went through their routines.

“The club, the coaches, parents and supporters have done an amazing job to ensure they can resume the swimming activities which clearly bring such benefits to so many young people regardless of their ability.”

Club chairman Richard Palmer-Jones said it was reassuring see the young people back in the pools at Richmond and at Colburn Leisure Centre where the club also operates.

He said the club’s volunteer coaches and head coach Ben Hatchett had worked really hard to keep all members engaged during lockdown and he was delighted that the club retained the vast majority of them during the long months when the club couldn’t operate normally.

The major challenge facing the club was making up the income lost through the cancellation of the regular inter-club galas it would normally have held.

This was essential to enable the club to maintain all its activities, particularly its para swim squad successfully established in 2019.

Rishi also met members of the Para squad during his visit, including 12-year-old Joe Field who, along with the club’s Archie Hare, has been selected for Swim England’s Foundation Talent Programme 2020-21.

They join a squad of only 56 other swimmers in the country who have achieved this accolade.