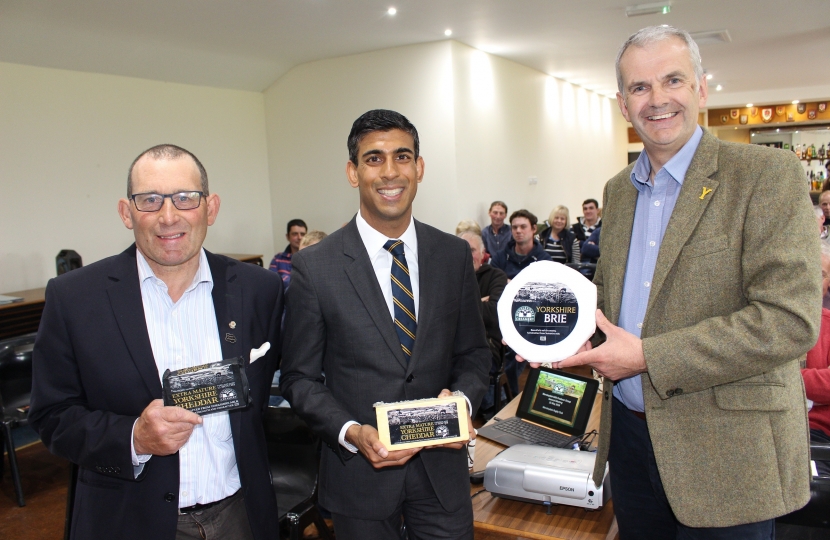 DAIRY farmers who supply milk to the Wensleydale Creamery at Hawes fired a series of questions about Brexit to Richmond MP Rishi Sunak.

He outlined the progress made so far in the negotiations with EU and said he was confident that a trade deal would be reached that would be in the interests of British farmers.

“We should not forget that the UK is a major importer of food from the UK and it is in the interests of our EU partners just as it is in ours that a deal is struck,” he said.

The MP fielded a number of questions about what would replace the Common Agricultural Policy support payments which many farmers rely on to sustain their businesses.

He said that while much had been reported on the Defra Secretary Michael Gove's stated intention to tie support payments to environmental protection and enhancement he wanted a British Agricultural Policy which also incentivised productivity and efficiency backed up with more research and development and the sharing of best practice.

Mr Sunak said he was convinced more effective marketing could help British farmers. “I may have missed it but I don’t think I’ve ever seen a TV advert for the Red Tractor brand. We need to able to convince someone living in suburban Birmingham that British produce, which has come from the countryside they love to spend time in, is worth paying a premium for.”

He welcomed the review of the activity carried out by the AHDB levy boards announced by the Efra select committee watchdog. The review follows concern that farmers did not have a big enough say over how their levy money is spent, particularly on promotion of British produce.

Mr Sunak was thanked for his contribution by Steve Scrivin, chair of the Wensleydale Milk Producers Group, and David Hartley, managing director of Wensleydale Dairy Products.