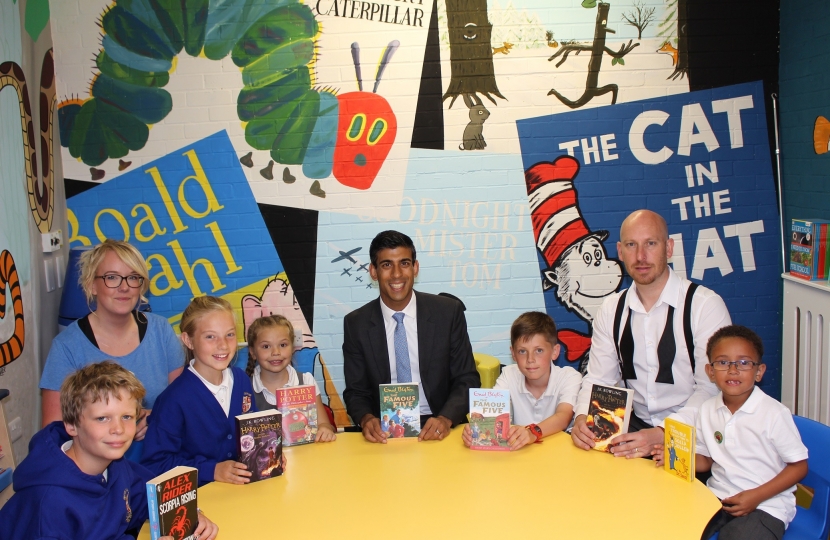 An outstanding school’s efforts to further drive up the writing skills of its pupils have been praised by Rishi Sunak MP.

It is a Year of Writing at Hutton Rudby Primary School and the Richmond MP saw the efforts being made by pupils and staff to develop creative writing skills during his recent visit.

Headteacher Matthew Kelly said the 211-pupil school had excellent results for its Key Stage 1 and 2 pupils but wanted to improve standards even further.

The school has two libraries and will shortly have a third.

Mr Kelly said: “The basis of good writing is good reading so our libraries are very important to us. We want to get the children writing at greater depth and that is our priority for this year.”

Mr Sunak was given a tour of the school by its two ambassadors, Poppy Ruffel and Guy Wilkinson, both aged 10, spending time in the classrooms, the playground, the soon-to-be developed nature area and one of the two libraries.

He said: “I have been hugely impressed by the enthusiasm of the pupils and the vibrant school environment. I applaud the current drive to develop the children’s writing skills which I am sure will be key to their future success at secondary school and beyond.”

The school’s last Ofsted inspection and report was carried out and delivered in 2012. The school was rated Outstanding.